"My time has come, and I have awakened. On the sacred stone of Horkos, I must now swear to bear the mask of war with honor and fealty. To walk the path of glory and death, without fear. To shepherd the strong and punish the unworthy."

"I will brandish the blade that rights all wrongs! I will bring revenge, strength and discipline! I will rise above all and speak the truth!"

Warmongers are a playable hero class in For Honor.

The Warmongers are grandiose warriors who will not go unnoticed on the battlefield. Their weapon of choice is the Flamberge Greatsword, a two-handed sword that is as elegant as it is deadly. According to their beliefs, they were gifted a dark power named Corruption to weed out all liars and impostors of the world.

It is believed that the Warmongers have recruited former members of the Blackstone Legion to their cause, but their ambitions go far beyond that. They are the leaders of the Order of Horkos, a secret society that has members from all factions. The Warmongers want to rally warriors who are willing to reject their old gods and start a new era.

To become a Warmonger, one must abandon their former identity, so that they can be "reborn" as one with the Order of Horkos. Their transformation is materialized through the forging of their blade and armor. Most of the Warmongers use materials from their past gear to reforge a new armor. Some take the gear from their greatest enemy (as the great Apollyon once did) and adjust it to their needs. All of their armor are also imbued with the power of the "Sacred Stone of Horkos," known as Draconite, that helps them spread the Corruption on the battlefield.

Flamberge Sword - A two-handed sword with an elegant blade. Its name comes from how the blade itself is wavy like a flame. Although slightly longer than the Warden's Longsword, the Warmongers wield this hefty weapon in one hand with ease.

The Warmongers share ties with the Blackstone Legion, but have greater ambitions. Wielding the elegant Flamberge, they are determined to punish those who refuse to join their cause. Not only can they isolate a target with a dark power named Corruption, they also have enhanced Light Attacks mixed up with strong Claw Attacks to put pressure on their opponent.

Available Perks for the Warmonger can be viewed on the Perks page. 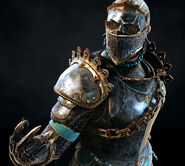 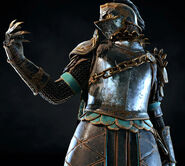 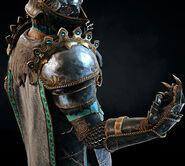 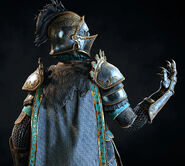 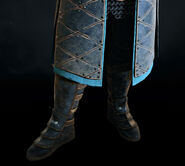 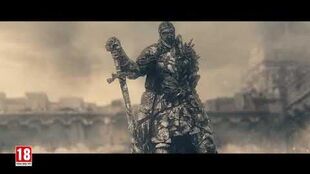 For Honor • The Warmonger Hero Trailer • PS4 Xbox One PC