View source
watch 01:23
For Honor Trailer: The Warlord (Viking Gameplay) – Hero Series #8
Do you like this video?
Play Sound

"There are traditions among our people that run deep as stone. Their shields are as versatile as they are strong. Their swords are lethal. Simple. An ancient design. And a leader who does not lead the charge is no leader at all. They are called Warlords, a name that is earned. Another ancient tradition. To become a Warlord means service to all who need it, for life. They are the shield of our people... and they will not fall."

Warlords are a playable hero class in For Honor.

Warlords are not born into leadership. They’ve had to earn it through blood, sweat and steel. To be a Warlord means a life of service to their people. Their shield protects those who cannot fight—their sword will cut down those who would attempt to cause their people harm. Their fighting style is simple yet brutal. You will always find them leading the charge.[1]

Warlords wear leather and animal pelt over chain mail. The chainmail also extends covers their arms, chest and their hips, with a horn hanging off the backside of their waist.

Their helmet is made of iron and is in the shape of a rounded or peaked cap made from four plates after the spangenhelm pattern; at the brim, it has leather drapes protecting the neck. The helmet also has a "spectacle" guard around the eyes and nose which forms a sort of mask.

Ulfberht and Shield - The Ulfberht sword, paired with a sturdy shield, allows the wielder to deflect blows and get close enough to their target to unleash deadly close range attacks.

While their combat style isn't overly complicated, Warlords are powerful counter attackers who can both hit hard and take a lot of damage. Their attacks have limited range but they offer defensive properties that make them perfect tools to counter incoming attacks or trade blows with the enemy.

Available Perks for the Warlord can be viewed on the Perks page.

A Warlord alongside a Berserker, a Raider, and a Valkyrie. 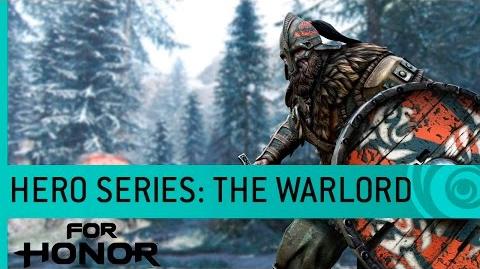 For Honor Trailer The Warlord (Viking Gameplay) – Hero Series 8 US