View source
watch 01:11
For Honor Trailer: The Warden (Knight Gameplay) - Hero Series #3
Do you like this video?
Play Sound

"The Wardens: members of an ancient order...fallen into dust. Sworn to defend the weak, masters of the longsword. Their origins lost to history; still they fight for what is right. Driven by duty, devoted to their people... but only a few may join their order."

For the single player campaign character, see: The Warden

Wardens are a playable hero class in For Honor.

"The Wardens are powerful, noble warriors dedicated to the defense of their land and their people. Striking a balance between defense and offense, wardens wear partial plate armor with chainmail and leather. Wardens wield massive two-handed longswords for slashing enemies and blocking attacks. Trained to be proud, loyal, and brilliant diplomats, the Wardens are expected to embody the highest values of Knighthood. Many set out to achieve this, few do." [1]

The Warden's default armor is a set of interwoven metal plates over chainmail, topped by a visored barbuta helmet made to protect against a stray arrow or blade strike. The partial plate is segmented along the torso, arm, and leg joints to provide great dexterity while still granting plenty of protection in battle.

Longsword - The two-handed longsword is a double-edged weapon. Its hilt is comprised of a long, jutting cross guard, a heavy pommel for counterbalance, and a grip wrapped in leather. In spite of its size and weight, it remains a versatile weapon offering a balance of offense and defense.

The Wardens are a jack-of-all-trade hero who roam the battlefield with their impressive longswords. They balance defense and offense and are easy to play. They make great choices for new players as they feature a simple-to-learn mix-up and a good set of basic moves.

Available Perks for the Warden can be viewed on the Perks page. 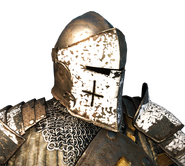 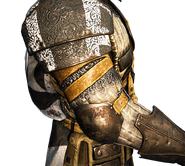 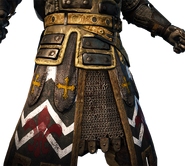 A Warden alongside a Peacekeeper, a Conqueror, and a Lawbringer. 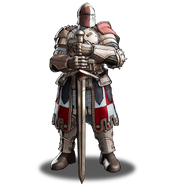 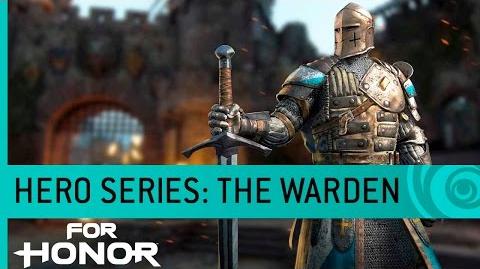 For Honor Trailer The Warden (Knight Gameplay) - Hero Series 3 US