The Walled City is one of the few ancient fortresses to have survived the Cataclysm. It’s sprawling and bustling with people, its walls are bruised and battered with the blood and tears of those hungry to see the mighty fall. After unrelenting brutal attacks, the enemy prepares their ram for the ultimate push.

The Walled City, like other Breach mode maps, is a long map with three parts. Phase one is just outside its outer walls, phase two located in one of the inner yards between the inner and outer wall, with the final phase being the keep where the Commander waits.

The Attackers make their way through this fortification built along the mountainside, made up of complete stone. Even with the high walls that it provides, Defenders better be careful not to let the Attackers take control of the archer points. A sacred artifact of olden times will be a prize to whoever reigns victorious at the end of the siege.

In Breach, the siege is underway. An army gathers outside the fortress while trebuchet bombard the walls. The Attackers have also begun rolling up a battering ram, pikemen and officers eager for battle. The Defenders spot the army but come under fire from the artillery. A section of the wall is demolished and taking out a group of pikemen. The siege is underway.

A full siege is underway and outside the castle is an entire field of trebuchet, siege towers, and an army ready to begin the assault. The shield banner lays in a trench at the side. On the other side, near a gorge by the wall, is the healing zone. Siege towers have docked with the wall and allow attackers easy access to the archer points. There is a ballista for the defenders as well.

As the siege continues, the battering ram needs to make its way through the fortress. As archer points are taken, more siege towers dock and serve as spawn points for the minions. The healing zone is in a storage room below the archer points. Across the lane is the mausoleum where the Guardian waits. Close to the gate is a ballista.

In the keep is a massive courtyard with a single archer point. On the other side is a ballista in a tower. A statue is all that stands between the ballista and the Commander. 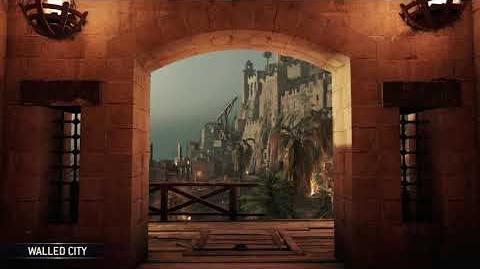