View source
watch 01:11
For Honor Trailer: The Valkyrie (Viking Gameplay)
Do you like this video?
Play Sound

"Valhalla: our reward for dying in battle. But what of those who die elsewhere? The Valkyries - a warrior order who have made a deal with the gods. Each one can earn glory for our fallen dead. In time, they can win a place for the deserving. But they alone decide for whom they fight. Masters of the spear and the shield, scouts, trackers, and perhaps your only hope for salvation."

Valkyries are a playable hero class in For Honor.

The Valkyries have made a deal with the gods. They will fight and earn glory so that those who can’t will be counted in the halls of Valhalla. They are scouts and trackers who use their spears and shields to deadly effect. They are chosen by the gods—pray that you never encounter one on the battlefield.[1]

The Valkyrie wear mostly leather armor with some metal plates. On their shoulder plates are fur linings that provide warmth in the harsh weather of Valkenheim. Their helmet has a full face plate and ram horns. The skulls of rams are attached to their gauntlets.

Spear and Shield - The Spear is a simple weapon: a sharpened metal point at the end of a long wooden shaft. The shield is small and only gives so much protection.

But put them in the hands of a Valkyrie and they are a deadly combination. The long shaft gives the Valkyrie reach, while the shield offers what defense they need. An attack can come from either and an enemy can find themselves on their back if they are too slow.

The Valkyrie is versatile with a slew of mix-ups in their chain. She is a very adaptable Hero and very good at keeping pressure on her foes through the use of Shield Bashes and Spear Sweep.

Available Perks for the Valkyrie can be viewed on the Perks page.

A Valkyrie alongside a Berserker, a Raider, and a Warlord. 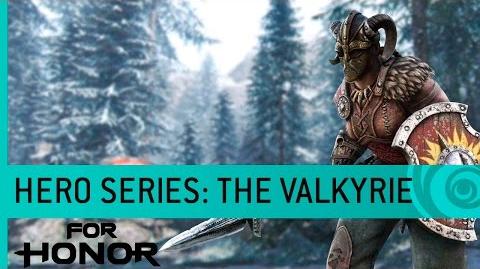 For Honor Trailer- The Valkyrie (Viking Gameplay) - Hero Series -11 -US-