War can turn places of peace into slaughterhouses. The tower ruins were once a place of worship and quiet contemplation, but they have been perverted into a stage of bloodshed.

They act as a pre-built guard post and their location up in the mountains makes them a perfect strategic target.

The monastery takes place at a temple, with one prominent four-story tower. The tower possessed multiple ways to enter and exit, be it its open doors, or the higher walls, or the ropes the Heroes can slide upon. Bridged to this tower was a smaller temple building, with a pond under the bridge.

From the tower, to its left was a small platform, where a shambled shrine exists. And down the stairs between the two warrior god statues was an open pavilion. On the right of the tower is a bell shrine and lantern tree, and down the ladders would be a roofed passage way, leading to the blocked gate. Between the Temple's bridge and the passage way is the Garden Pond where a statue sits above a second pond different from the one under the bridge.

A smaller wood bridge levels over the pond, with a cell hall under the temple, work as a passage way between the Garden Pond and the Pavilion area. 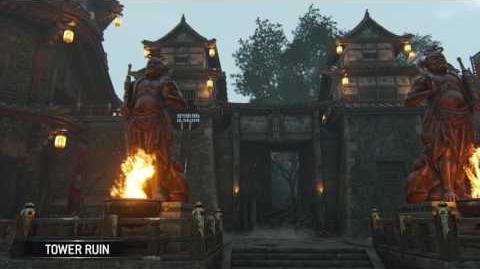