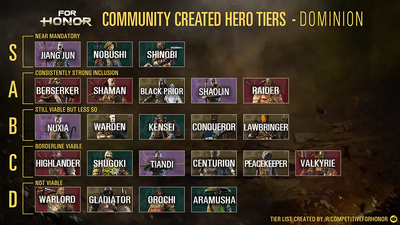 In gaming, a tier list serves as a record of the ranks assigned to all characters in a game based on the strength of their fighting abilities, as well as their potential to win matches under tournament conditions, assuming players are of equal skill. Tier lists are most commonly made for fighting games that are played at a high competitive level, though games with large character pools, such as the Pokémon series, can also have their own tier lists.

A character's standing on a typical tier list is based on a variety of factors:

However, for For Honor, the community has pooled together a "viability vs playstyle" graph instead to more accurately judge a Hero's strength and weaknesses with better nuance of each Hero's traits. This means that while some of the factors above are relevant, the For Honor graph aims not to put Heroes above or below another on a single line, but to process their position on the graph with awareness of what role they play.

In For Honor, there are currently three graphs (Dominion, Brawl, Duel). Each graph is divided into two parts: the playstyle the Hero fights closest to, together with their viability in their designated playstyle. Each gamemode has different gameplay goals, thus different playstyle categories, causing different Heroes to be suited better or worse between gamemodes. However, the consensus of viability is the same across gamemodes, between the three grades of Strong, OK, and Weak.

Take note that these graphs do not place Heroes in order of strongest-to-weakest within their respective category of Strong, OK and Weak.

Across all gamemodes, Revenge is not taken into consideration either due to inconsistency or to encourage aggression when considering competitive play.

The following factors are in general features that would make a Hero good in Dominion:

Disclaimer: While Gankers and Roamers may sound similar, Gankers are solely focused on singling out lone enemies, either on their own or with an ally's help (Assassin's tend to fill this role for the reason). Roamers are more well-rounded and supportive, as they try to aide allies who need help, back-capping points and joining teamfights.

The following factors are in general features that would make a Hero good in Brawls:

Clarification: "Damage Output" refers to a class of Heroes who may not have the pressure to force enemies on the defense, but have the ability to confirm damage for allies or output raw damage if their ally opens the opponent up.

The following factors are in general features that would make a Hero good in Duels:

The Breach gamemode takes teamwork to a level beyond Dominion's as there is more at stake than a few capture points. While, like Dominion, the ability to safely deal damage in group fights and efficiently tank are still critical, the longer respawn times and the decisive objectives require for Heroes to have the speed to cross the battlefield along with the ability to deal with multiple enemies if cornered. Healing is much more scarce too, so Heroes who can stand on their own or have access to healing/defensive Feats are paramount.

!! Due to the Breach tier not having been updated due to no competitive data, a tier list or graph is not available, nor would it be accurate in reflecting the current update. !!

Retrieved from "https://forhonor.fandom.com/wiki/Tier_list?oldid=28318"
Community content is available under CC-BY-SA unless otherwise noted.