Thornfinn is a character that appears in For Honor's single player campaign.

Thornfinn was a Raider who was defending one of the Warborn's defensive catapults during the mission Valkenheim In Winter. Holden Cross encounters him at the second catapult and fights him. Thornfinn was able to knock Cross back onto the ice and followed him down. He was defeated by Cross shortly after. 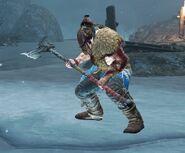 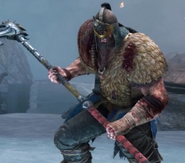 Add a photo to this gallery
Retrieved from "https://forhonor.fandom.com/wiki/Thornfinn?oldid=24778"
Community content is available under CC-BY-SA unless otherwise noted.