These massive fortifications were built to keep sieging armies at bay for years. They have huge strategic importance in the ongoing Faction War.

All types of fortifications litter the land of Ashfeld, representative of what great cities are left for the Knights. Some fortification cover a large plot of land around an expanded city, as other are compact and small. But some are large and tall, and the Shard is one of them. Apollyon herself and her Blackstone Legion inhabited a fortress very similar to the Shard.

One giant rampart protecting this seemingly endless castle, siege towers are needed to have any hope of attacking. The siege towers have secured an attacker landing, so the Attackers commence their assault. Likewise, Defenders come out of the gates to meet the invaders, meeting up at where the Rampart is above the main gate, where the two guardian angel statues stand to its side.

The one large rampart works as the main outdoor battlefield of the Shard. However, towards the inside of the fort are the Pit and the Twin Angels.

Closest to the rampart is the Pit, which is located down between the main gate and an inner gate, both inaccessible because the former is reinforced to be closed while the latter has a ditch filled with spears in front of it. In this Pit are two piles of burning wood, which can be a Hazard to the Heroes.

The Twin Angels is just above the inner gate, being named after the two knight statues with angelic wings on their back that stand in its courtyard. Heroes should be wary of hazards such as wall-spikes or open edges to the ditch below.

Corridors, stairs and bridges connect the Mid-Ramparts, the Twin Angels, and the Pit together and to each side's spawn point.

In Dominion, a siege is already underway and the Attackers have started hopping off their siege towers onto the rampart. Meanwhile, the Defenders have opened their gates and have begun rushing out to meet the enemy. 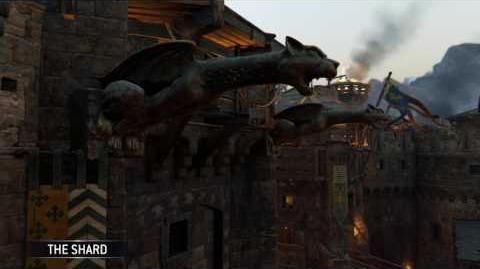 For Honor- The Shard - Knights