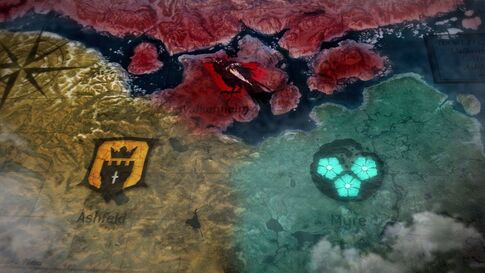 "There were no signs; it came without warning. Doom came to us all. The desperate few struggled to survive. Perhaps we had a chance for peace, but desperation and trust are seldom allies. So began a millennium of conflict, a thousand years of war. The greatest warriors the world has ever known the reason they fight lost to the ages; and yet here they still stand, searching for a sign of peace."

Long ago, a massive cataclysm struck the world, the landscape rearranged and the land of the Viking and Knights merged together. Rebuilding, the Knights claimed Ashfeld as their home. However, the devastation forced the Vikings to head north, leaving the lands of Valkenheim, and they seemingly vanished. Rebuilt and recovered, the Knights needed more land to expand and thrive and have begun expanding north into Valkenheim. Unbeknownst to them, the Vikings have returned to reclaim the lands they once called home. Empty and abandoned, the Knights see the land as unclaimed while the Vikings believe the land was already theirs, forcing the two into an age of war. Meanwhile, history was not kind to the Samurai. Their homeland to the east was devastated by the cataclysm and about to sink into the sea. Out of desperation they packed as much of their civilization onto ships as they could in search of new land to save their people. After years of searching, their journey took them to the marshy land known as the Myre, a land near the homelands of the Vikings and the contested lands of the Knights. Having found refuge, they tried to send word back to their kingdom only to find their homeland lost to the sea. Realizing that the Knights and Vikings had begun to lay claim to and use the Myre to help turn the tide of their war, the Samurai have entered the fray to protect their homeland and their people for they may be the last of their kind.

And so began a millennium of conflict. But after years of war, no victor had emerged. Then as quickly as they began, the Vikings mysteriously ceased their raids, allowing the Knights to repel them and the Samurai out of Ashfeld. However, the Knights chose not to pursue their foes and opted to defend their lands instead. When both the Knights and the Vikings ceased their assault on the Myre, the Samurai also opted to stay in their lands. So peace fell upon the land.

When the Viking raids began anew, the Knights had become complacent and weak from the era of peace and but Vikings lacked the ferocity they once had. Unsatisfied by this, Apollyon and the Blackstone Legion sought to renew the Great War.

She started by gathering allies, recruiting Iron Legion commanders who felt the Legion had grown weak. She proceeded to attack Svengard to destroy their food stores. The Vikings soon turned on each other for food but this age of chaos allowed Stigandr to rise to the position of Jarl, unite the Vikings, and raid the Samurai city of Koto. The Blackstone Legion proceeded to go to the Myre and assassinate the Emperor. While the Daimyo's initially turned on each other, Ayu became Empress and rallied the Samurai to end the Blackstone Legion in retaliation.

Meanwhile, Apollyon's ruthlessness caused many of her subordinates to join the Iron Legion against her. Together, the Knights and Samurai lay siege to the Blackstone Legion's fortress and slay Apollyon. However, her work was done.

The Great War had begun again.

The Faction War is the persistent cross-platform conflict between all three factions. Vikings, Knights, and Samurai. It is the reason players are asked to pick a faction at the beginning of the game. All player and bot activity during gameplay (with the exception of Practice Modes and Campaign ) determines the outcome of the Faction War.

The War Faction map is divided into territories, with each territory divided into smaller sections call Fronts. Fronts determine which maps players will play on. Fronts that have been captured by a specific faction will have that faction's flags and other visuals portrayed on that map.

A full season in For Honor lasts 10 weeks with the Rounds lasting 2 weeks each, for a total of 5 rounds per Season. The Faction War map is updated every 6 hours. During the season, players will do battle and earn experience, rewards, Steel and War Assets. The map they play on will be determined by the current territory domination.  At the end of the season, the territories will be reset and faction visuals removed. There will be an off-season period before the next season begins. Once the season is over, players will get rewards based on the rank of their faction at that time.

War Assets are used to determine a faction's ownership of a territory. Players can place War Assets in their own territory to defend it, or place them in an opposing faction in an attempt to help take it. If a player does not place their War Assets, the game will do it for them. At this point, the player will not have the choice of placement.

While players can switch factions any time they want, if they change factions after the first round, they forfeit any winnings they may earn at the end of the season. 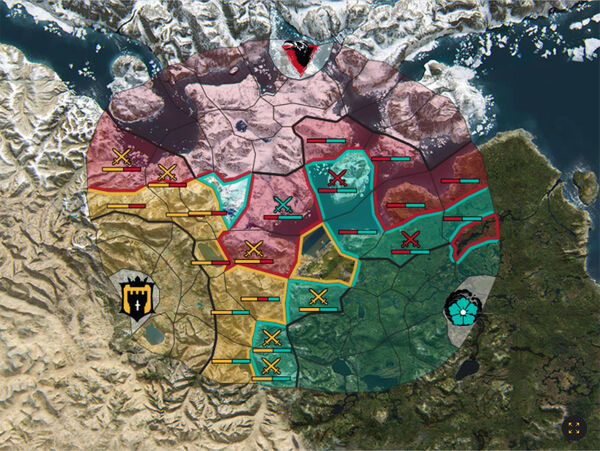 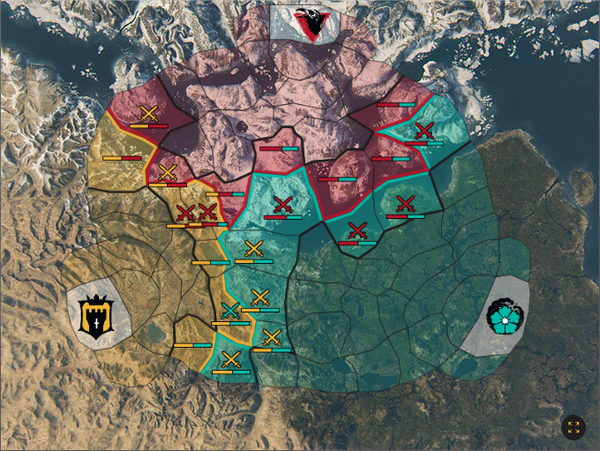