"We had the Vikings on the run. And, in the mopping up efforts, we also claimed the rest of the scattered Legions, bringing them under Blackstone rule. The Warden, I think, had reservations about some of our methods."

The Blackstone Legion is the third chapter in the Knight Story Campaign. Having defeated the Viking invaders at Harrowgate Sanctuary, The Warden is now called upon to clear out the remaining opposition in Ashfeld, including but not limited to Iron Legion deserters.

Having been given directions by Holden Cross, the Warden meets up with Stone and they head out into Ashfeld. Their goal was to take an outpost which had been overrun by Vikings. They raid the outpost and kill the Viking leader.

Their next goal was to reach the rogue knights (deserters) in the forest. Just after leaving the gate of the outpost, The Warden and Stone are attacked by a Peacekeeper, not happy about their presence. They soon find the remnants of the Iron Legion in the area, though the deserters are not happy to see Blackstone on their turf.

Though The Warden and Stone are able to clear out the deserters, more arrive and corner the two. Suddenly, the deserters come face to face with the leader of the Blackstone Legion: Apollyon. She dispatches several of the deserters with ease while her troops box them in with her. She easily slays her challengers while the rest of the deserters surrender.

To the shock of her prisoners, she orders her men to stand down. Two of the deserters take advantage of this opportunity and try to assassinate Apollyon but they are easily subdued. She proceeds to execute the other prisoners, but for her two attackers she says one thing: "Welcome to the Blackstone Legion."

The Warden: (voiceover) I had questions. About the Blackstone Legion.

Camera cuts to a cliff side with dead knights hanging from trees. The Warden walks up to Holden Cross on the cliff.

Cross: The last of the Vikings are holed up in an outpost ahead. One that the Iron Legion deserted.

The Warden begins heading in the direction of the outpost.

The Warden: I can handle it.

Cross: (mutters) Careful with that ego.

Camera cuts to The Warden rounding a crumbling stone wall, where Stone waits.

The two of them head for the outpost.

The Warden: (voiceover) Deserters? I wanted to see for myself.

The Warden: (voiceover) Stone was Iron Legion. I trusted him.

Stone and The Warden make their way to the outpost. They quickly dispatch a small party of Vikings before arriving at their destination.

The camera cuts to Stone and The Warden taking cover behind a rock right outside the outpost. They watch as the Vikings toss the corpses of their enemy over its walls.

The Warden: Everywhere we go, we've abandoned our people. What has happened to the Iron Legion? Wait here. I'll clear the bridge.

The Warden then jogs off to clear the bridge.

The Warden dispatches the first Viking at the front gate, causing them to open the doors to let more Vikings out to take on the enemy.

The Warden and Stone fight their way through the outpost, finally slaying the Warlord that was the Viking commander.

The outpost had been cleared out but now it was time to find the rogue knights. A Peacekeeper ambushes The Warden and Stone, exclaiming "Die, Blackstone dogs!", but she is quickly dispatched. They proceed up the path, dispatching another party of rogue knights. They finally reach the encampment.

Camera pans over the scenery of the demolished stone church.

The Warden: (voiceover) They were members of the Iron Legion. All Legions shared the same oaths. What had happened here?

A guard outside spots The Warden and Stone coming up the path and heads inside. The two Blackstones exchange glances before following him.

Cut to inside the ruins, where the deserters stare at the Blackstones suspiciously. They stop in the center to address the onlookers.

The Warden: Why have you abandoned your posts?

Rogue Conqueror: (stepping forward, brandishing his flail) A Blackstone dog has strayed from his pack.

The Warden: Stand down! Your people need you!

Stone: One of us should go home and change.

Stone steps forward but The Warden stops him.

The Warden: (angrily) Why... have you abandoned your posts?

The Rogue Conqueror looks at the other rogue knights, his patience finally running out.

Rogue Conqueror: (to the other deserters) Kill them.

Surrounded and outnumbered, The Warden and Stone take on all the knights around them. They may have been outnumbered but they were not outmatched as the deserters were defeated. However, victory was short lived.

Camera quickly cuts to The Warden who turns to face the sound of battle cries. The camera then cuts to the church entrance, where more rogues charge in. The Warden and Stone prepare for battle but an arrow suddenly hits Stone in the shoulder. He falls back and angrily snaps off the arrow.

The Warden: (voiceover) That was the day I finally met our warlord.

The rogues prepare to attack but something behind them catches their attention. Apollyon suddenly emerges, impaling one captain and tossing his corpse aside. The other rogues attack her but she dispatches them one by one, taking out a captain, a Warden, and two soldiers. A second Warden attempts to attack her from behind but she whips around and decapitates him.

Stunned and horrified by what they just saw, the other rogues begin backing up but are shoved back into the ruins by Blackstone soldiers, who have cut off the escape routes.

The two groups collide with Apollyon taking on a Peacekeeper while The Warden faces a Conqueror. Though Apollyon manages to decapitate the Peacekeeper she faced while receiving a stab to her stomach, The Warden is overwhelmed by the Conqueror's flail and is pushed back. Just as the rogue Conqueror is about to finish The Warden off, Apollyon comes up from behind and slices his arm off, his limb and weapon flying into the air and falling back to the ground. She then takes his head off and lets the corpse fall to the ground.

Apollyon pulls the dagger from her stomach and tosses it aside.

Apollyon: (holding out her hand) Got you, Blackstone.

She pulls The Warden to his/her feet and turns around to see more Blackstone reinforcements arriving while the remaining rogues are apprehended. She gives her subordinates a nod and they all proceed to put away their weapons. The prisoners look around in shock.

A soldier and a captain take advantage of this and rush at Apollyon with daggers in their hands but are easily subdued and shoved to the ground. While her men keep her attackers down, she proceeds to address the remaining prisoners.

Apollyon: Do you know what kind of creature waits for its own slaughter? (turns away and mutters) Sheep...

Apollyon whips around and decapitates two Wardens with one swing.

The Warden: (rushing forward) No!

Cross quickly holds The Warden back with his hand, telling him/her not to interfere. The Warden reluctantly stands down and watches as the remaining prisoners are executed. Apollyon then addresses her two attackers.

Apollyon: Welcome to the Blackstone Legion.

The Warden: (voiceover) I had my answers. But, too late. And a Warden's oaths are not lightly broken. 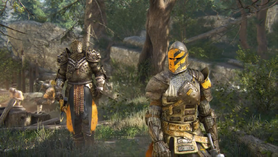 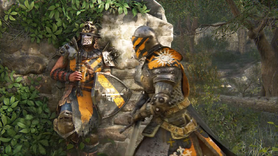 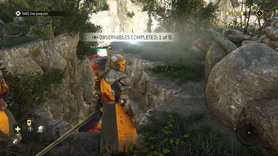 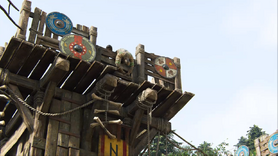 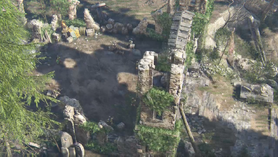 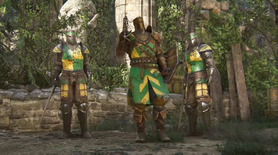 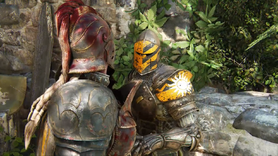 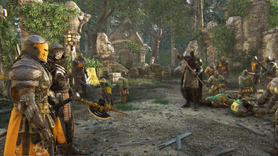