Were it not a battleground, the Temple Garden would be one of the most beautiful and serene spaces. It is an open ground of beauty, sitting against a hillside, with a sense of being one with nature.

It's a shame that the view from this temple is what made this place so strategically important.

The entire landscape is built in front of the cliff tomb with stone paths leading down from the tomb to the central frog fountain. The attackers can access either through the exterior while the defenders can access this through the monastery. On the other side of the map is a giant tree on a small island connected via several wooden bridges. The defenders can reach here via the Dojo garden while the attackers come from the other side through the Bell garden. Between the tree and the frog fountain is the central stone path where the soldiers clash, with fierce guardian statues standing high over the battle on the tree side of the path.

In Dominion, attackers are attempting to sneak into the city through the garden. They carefully eliminate the sentries first. A pair of soldiers are talking on a balcony and one of them is shot and killed. The same happens to the other but he succeeds in ringing the gong before succumbing to his wounds. The sound of the gong alerts the defenders, who order the gates to be sealed as they mobilize. With stealth out the window, the attackers charge onto the battlefield 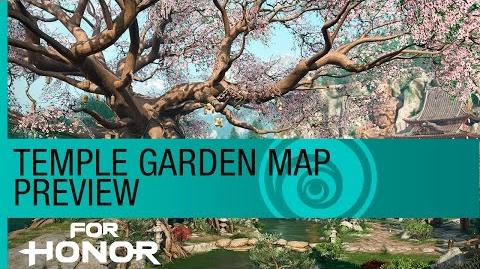