The Viking fortress of Storr Stronghold stands sentry over the seas. It was built on the site of an old Trelleborg fort that had burnt to the ground. It is a massive stone structure with broad turrets that honor Viking tradition. The high walls that hug the ocean shoreline make any assault a brutal affair for attackers. Cultists believe that this fort is littered with the scales of the great serpent god, Jormungandr... and they may be right.

Storr Stronghold, like other Breach mode maps, is a long map with three parts. Phase one is just outside its outer walls, phase two located in one of the inner yards between the inner and outer wall, with the final phase being the keep where the Commander waits.

The Attackers defile the ground of the Jormungandr as they storm this sea-bound stronghold. Even with the waters around, the Defenders must defend themselves for the incoming wave. However, it is only the great serpent who knows the outcome of this siege.

In Breach, the Attacking boats come crashing into the front shores of the island fort, with soldiers pouring onto land. Defenders are not as well prepared for this attack, finding themselves dying one after another by incoming arrows. And as the boats lay out their boarding planks and a catapult hurls a stone into the opposing fortification, the siege begins. 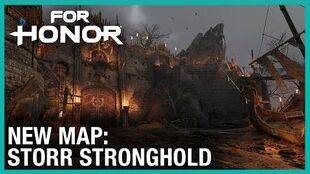