Sword & Shield
Soldiers are AI controlled minions that appear in the campaign, dominion, and skirmish mode.

There are soldiers for all three factions and are identifiable by the unified design of their helmets, body armor, and shield.

At the start of the Sakura update, the Soldiers' shields featured varied patterns than the standardized single pattern design they used to have. While some continued to have the same pattern, there could be other Soldiers whose shields would have their own design; in some cases, all soldiers would sport a unique pattern on their shield.

As of Season 1 of the Year of Reckoning, Soldiers have received updated appearances to reflect the peace after the recent Cataclysm, which brought new resources to all factions. Their outfits are cleaner and striped, and their headwear now use gold or fine iron material. There are now multiple tones of team color for Soldiers, with Attackers having red and oranges, and Defenders having blue, violet and blue-greens. In addition, there are new voice lines.

Keep in mind that differences between factions are purely aesthetic, as they will all behave in the same way.

Soldiers are noticeably smaller in comparison to the Heroes of each faction, with even the smallest of Heroes (ie. Peacekeeper, Nobushi) standing a bit taller than the Soldiers. This may be justified by the fact that after the Cataclysm centuries ago, there was a lack of access to resources, thus only the strongest or fortunate (Heroes and Captains) were properly nourished, while others such as Soldiers were left without the means necessary to maintain that kind of physique.

As purely AI controlled units, Soldiers have a set function in each of the game modes. In non-Dominion games, they occupy a certain point of the map together with a Captain. Whereas in Dominion, they collective charge from either sides towards the center point objective, Point B (on The Shard, this is Point C), beginning an endless stalemate that only ends when one team wins and the other team's Soldiers retreat.

Factors of combat against Soldiers is as follows:

Soldier behavior depends on whether or not there are other soldiers nearby. If alone, soldiers will be passive and throw single attacks before backing off and waiting before throwing another. When in large groups, soldiers will be much more aggressive, throwing two to three strike combos even when faced with a Hero.

While soldiers are not dangerous in and of themselves, they can cause a multitude of problems for Heroes. While allied Soldiers will move out of your way, enemy soldiers will not. This can hinder a Hero when a player tries to cross the map, or trap them when trying to dodge an enemy's attack or escape from them. Soldiers can even block moves such as a guardbreak, causing you to guardbreak the soldier instead and be open for an attack from the opposing Hero. Even though their attacks inflict minimal damage, you will still flinch and cannot perform critical actions such as revives or executions when there are enemy Soldiers around.

Take into mind too, your own Soldiers can provide the same trite to opposing Heroes. If you are running to escape an enemy, running through a line of your own soldiers is almost guaranteed to end the chase. You can even use your own soldiers to your advantage when battling an opponent as the soldiers will now hinder them instead of you.

Soldiers are crucial in Dominion, as they are the moving force in one of the three point objectives, Point C for the Shard and Point B for every other map. The two armies will battle each other on the central capture point. If the battle for the central point favors the enemy too heavily, the soldiers may even begin retreating. Even without Hero intervention, one army will drive the other off the capture point. When one team gains control of the center objective the opposing team will spawn a larger group of soldiers while the team holding the point will spawn fewer soldiers. This will eventually drive off the current holders of the point and return it to neutral and the cycle repeats.

Killing soldiers will count as hard points for the match.

On certain maps, pairs of dueling Soldiers will appear at certain points of the sidelanes at the start of the match. While Heroes can choose to intervene on these duels, the Soldiers will eventually resolve with one side winning before returning to the skirmish happening at the center point.

In Skirmish, typically together with Captains or Shield Captains, Soldiers from both sides litter the field, with more spawning whenever a group of soldiers have been killed. While they award points and can cause damage, unlike in Dominion, they are much less of a threat.

Soldiers appear in every major Campaign battle, and can be found engaging in smaller skirmishes. They may be in smaller groups along with Captains, or in larger amounts in Dominion-type fights. They often control an enemy zone or archer point, along with Heroes and Captains. 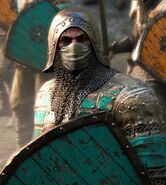 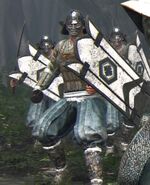 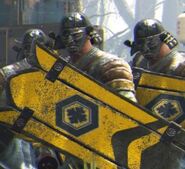 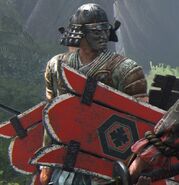 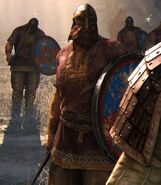