View source
watch 01:20
For Honor Trailer: The Shugoki (Samurai Gameplay) – Hero Series #7
Do you like this video?
Play Sound

"We are far from home, we samurai. Each new land teaches us new things. Each new ally makes us stronger. The shugoki: once our guardians, they have become as family. And what more fierce protectors could we ask for? The kanabo is an unreasonable weapon; clumsy, dangerous... unless you possess the strength of a demon and an unbreakable will."

Shugoki is a playable hero class in For Honor.

The Shugoki appear slow and cumbersome. Don’t let that fool you -- they possess the strength of a giant and an indomitable will. It takes incredible fortitude to be the guardians of your people. You must defend them at all costs and put their needs above your own. This has never been an issue for the Shugoki. Their weapon of choice seems unwieldy, but in their hands, it is as deadly and precise as any blade.

The Shugoki wears massive wooden plates protecting his torso and arms. An obi sash around his waist and a nawa belt hold the garments together. Unlike their comrades, he only wears a hakama with cloth and leather straps attached, with no noticeable shirt or torso garment under their wooden plates.

The Shugoki does not wear a kabuto but instead wears a somen mask that gives him the face of an Oni, a Japanese demon with the superhuman strength to wield the kanabo with ease. The somen is typically accompanied by a cloth neckguard and a topknot in various styles.

Kanabo - This traditional club is so large that it takes a powerful, but also skilled warrior to wield it correctly, even more than the nodachi. It can deliver a crippling blow with every hit, but its weight tends to leave the user open for counter-attacks if it misses.

The Shugoki are the disruptor Tank. Their high health, together with their ability to be unflinching through their uninterruptible attacks, make the Shugoki a Hero who can make trades most wouldn't be able to commit to. He's excellent at dealing crippling blows to enemies with his massive kanabo.

Available Perks for the Shugoki can be viewed on the Perks page.

A Shugoki alongside a Orochi, a Kensei, and a Nobushi. 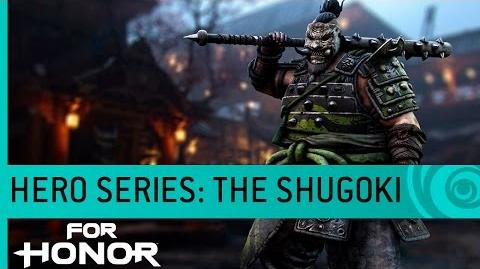 For Honor Trailer The Shugoki (Samurai Gameplay) – Hero Series 7 US