Viking shipyards are a wonder to behold! They have been crafting ships for many generations, and it is a skill that is passed down from parent to child.

Ships and siege weapons require massive warehouses to produce, and the Vikings control many shipyards along the coast of Valkenheim. The faction that controls them would surely have an edge over their enemies.

With the shipyard facing the ocean, warriors can stand on the many bridges used as lookout points to gaze across the waters. More bridges and walkways litter the dock, some safe but others extended over the waters. Be wary that you are not tossed off because of how narrow these bridges are.

On the other end of the shipyard is a raised platform and the main gate, leading into town. Standing in between are three docks. The dragon lodge's dock is empty, but the crane docks has a new ship that can be boarded, but is still under construction as its mast is missing. The third and final dock is an old one with a ship wreck that's partially dipped into the water. This dock sits next to the sawmill, where the saw inside can be a fatal hazard. 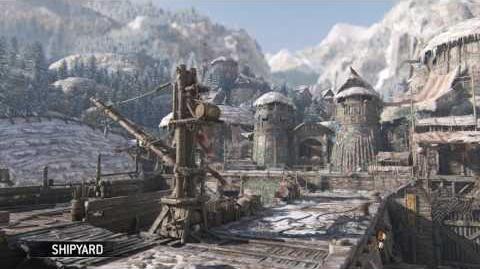