View source
watch 01:14
For Honor The Sentinel - A Castle In Ruins - Season 3
Do you like this video?
Play Sound

There are some ruins in Ashfeld that have changed hands so many times that all that remains is stones on a mountain side. A once bustling outpost, all that remains of this Sentinel is a tower, some ramparts and an excellent view of the valley below.

Sitting on the side of a cliff, the central battlefield sits between two fortifications, the ramparts and the tower. There are ledges abound to push people off whether it is onto the battlefield or to the valley floor.

The main bridge to the tower interior has barricades with spikes to shove enemies onto and the tower balcony overlooks the valley. The upper courtyard has a horse rider path to the ramparts for easy access on one end, and the lower ruins have a crumbling path for access from the other. There are also courtyard and cliffside paths for easy access into the tower.

Both fortifications have a ballista in dominion to provide covering fire, but each ballista cannot rain fire on the entire battlefield as there are obstructions.

In Dominion, the atttackers and defenders meet on the battlefield. One soldier in charge on each side gives a speech to his troops before they charge into battle with the remainder of their forces joining the fray. 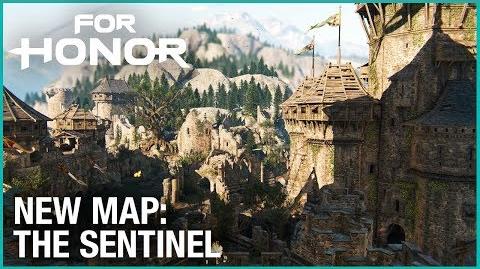 For Honor- The Sentinel - A Castle In Ruins - Season 3 - Trailer - Ubisoft -US-
Deutsch
Community content is available under CC-BY-SA unless otherwise noted.
Advertisement