Once the personal retreat of a pious Lord surrounded by water, it is now a highly disputed outpost.

At its center is its keep, a large fortified tower built upon a small tomb. At the back of the keep is the chapel, once a place of worship and now a place of ruin.

On one side is the west ward which hangs over the the water below.On the other side is the east ward, a long hallway that has collapsed. Once you reach the front, you will reach the courtyard and a view out the main gate, which is sealed shut. On either side of the gate are cauldrons of flaming coal and embers with a lever, ready to douse all who stand below.

The entire structure is surrounded by ramparts. You can find a staircase up or you can climb any of the many ladders to access the higher levels.

At the top of the rampart above the main gate is the lever to control the gate into the keep. However the mechanism has been damaged and will simply drop the gate onto anyone unfortunate enough to be beneath it. 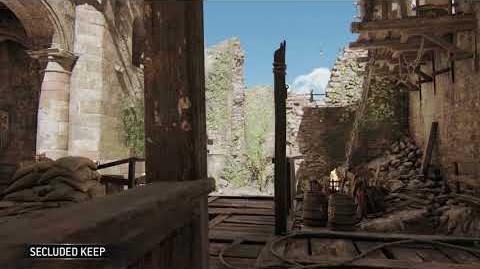