The land in the Myre is not particularly conducive to large construction projects, but that hasn’t stopped the tenacious Samurai! They built their Sanctuary cities on hilltops and managed to keep them elevated from the swamp floor.

The bridges leading into these Sanctuaries were built out of necessity, but they now act as a natural choke point for invading armies. The army that can take the bridge will control the Sanctuary beyond.

As its name suggests, the Sanctuary Bridge is a massive bridge with a bell tower near the forest entrance and a tower with a cherry tree near the sanctuary. There are lanes on the sides of the bridge that allow for easy and unnoticed travel but if you do run into someone, be wary you are not thrown off the bridge. There is a pit located on one side, near the middle of the bridge. Between the towers and the middle of the bridge, located in the side lanes are gates. With four in total, two for each side lane, these gates have their mechanisms damaged. As a result, these gates do not close slowly, but instead slam down after a second delay when its respective lever is pulled.

In Dominion, attackers have assembled at the start of the bridge to take the city. The lead soldier gives a yell to initiate the attack, with catapults and archers opening fire. In the Sanctuary, catapult fire rains down on the buildings. Left with no choice, the defending soldiers go out to meet their enemy on the battlefield. 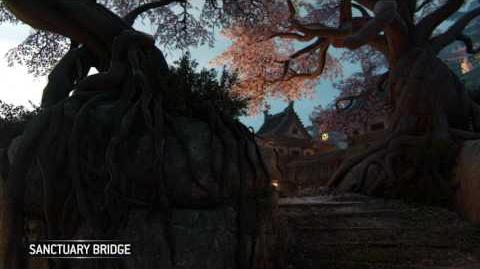