"Cast away from our land, we are rebuilding. Our hearts are strong, our devotion: absolute, and our skill is beyond question. We will be remembered."

The Samurai of the Dawn Empire is one of the four playable factions in For Honor. These people come from a land, far to the East and they tell a tale of a homeland and an Emperor that were lost to sea and fire during the great cataclysm. Now, more than a millennia later the nomadic warriors roam no more and have rebuilt themselves in a new land with a new Emperor.

After having been driven from their ancestral homes and rebuilding their forces, though strong and mighty, the Samurai still find themselves vastly outnumbered by their new neighbors. Because of this, they know that only through greater cunning, skill and loyalty to each other will their people have a chance to thrive. They may very well be the last of their kind.

The Samurai are the most unified of the three factions, though this does not say much as the Daimyos were often battling each other for dominance. They are the smallest in number and facing almost constant threat of extinction. They have had to rely on skill, cunning, ingenuity, and determination to pull through. They are led by a single Emperor, the current being Ayu. The Dawn Empire is broken into multiple houses, each led by a Daimyo. The current reigning house belongs to Ayu and is known as The Chosen.

Honor is highly valued amongst the Samurai. They are loyal to the death, battling to defend those they have been sworn to even in hopeless situations, and vowing vengeance should their master be slain. Pride, ambition, and honor seem to be linked as demotion is seen as dishonor to the point the act of jailing a person is considered a grievous insult.[1]

"We are all that remain of an ancient people. That is why each of our warriors must be the match of ten of our enemies. Fearless, disciplined assassins from a faraway land, we fight and die in the name of our ancestors. Our courage is unwavering, our skill unmatched. Masters of war, our blades strike quickly, silently, lethally. For there is no honor in defeat. Are you worthy of the samurai?"

Their armor was originally made from steel, laced together by lacquered sets of leather. Now, with metal scarce in the swamps, the Samurai use the resources they have more plentiful of, combining wood and lacquered leather for their armor.

Nodachi (野太刀) - All Kensei use this weapon for fighting. It is a much longer variation of the Katana and is used to cleave enemies in a few elegant and powerful strikes. Since it was too large to have it sheathed at one's waist, it was either carried in hand or on one's back. It is also known as an "Odachi" (大太刀).

Katana (刀) - A traditional Japanese sword. It is considered a hand and a half sword, meaning that it is best wielded by two hands but still can be wielded effectively by one. The blade is curved to maximize cutting power but not curved too far, allowing the Katana's thrust to be just as deadly. The hilt is protected by a circular guard.

Kanabo (金棒; lit. metal bar) - Also known as the "tetsubo" (鉄棒; lit. iron bar), these are clubs ranging from the size of two-handed clubs to as large as a man, the latter in the case of the Shugoki. These blunt weapons are used to smash armor and break bones. Kanabo are heavy and unwieldy, but when they are swung, nothing can stop them.

Naginata (薙刀) - A Japanese polearm consisting of a long shaft and a curved blade at the end. Allowing extended reach, the blade is capable of cutting at enemies from a safe distance and the shaft can be used as a blunt weapon when they get close.

Kusarigama (鎖鎌; lit. chain-sickle) - Another farm tool turned into a weapon, this traditional weapon consists of a kama (鎌; lit. sickle) on a kusari-fundo – a type of metal chain (鎖; kusari) with a small iron weight (分銅; fundo) at the end. While the Shinobi has replaced the iron weight with a second sickle, the weapon is still capable of deadly feats and disarming maneuvers from both close and afar.

Dual Katana - The Katana is the archetypal single-edge curved sword of the Samurai. Some are honored family heirlooms and others are taken off dead bodies. For the Aramusha, they wield a set of such swords, using them in the infamous dual-blade style that only few can master, with serrated edges that make them even more deadly.

Masakari Axe (鉞) - This large double-headed axe has been used by the Hitokiri to deal the death blow for executions. Although heavy like the Kanabo, using its two heads to the weapon's full capacity requires a truly skilled manhunter to wield its edge. Its size alone can intimidate anyone uncertain of their victory.

Shikomizue Blade & Scabbard (仕込み杖) - A single-handed sword that is concealed within an undecorated scabbard. Due to its straight edge, the concealed weapon can deceivingly look like a harmless stick until it is drawn. The Kyoshin use this blade both in the overhand and underhand grip. 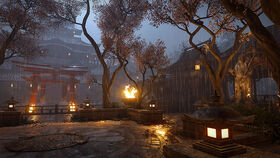 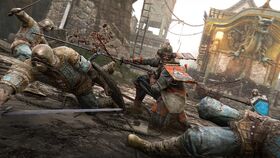 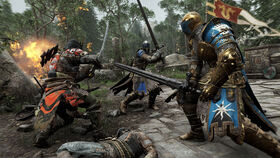 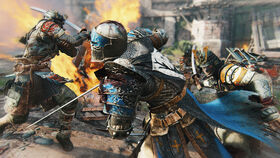 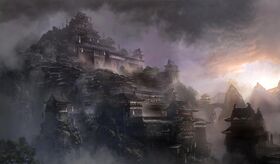 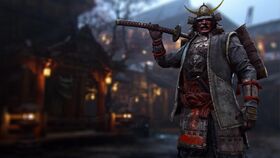 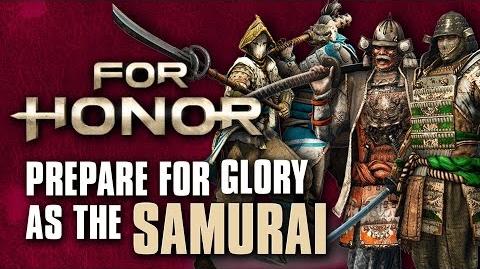 For Honor- Prepare For Glory As The Samurai