The Rabbid Invasion was an unnamed mini-event in For Honor taking place during April 1st through the 2nd, 2019.

As part of an April's Fools mini-event, the game was themed after Raving Rabbids for an entire day.

All soldiers and pikemen were reskinned as Raving Rabbids armed with toilet plungers or scrubbers, along with helmets of their respective faction. Their dialogue voices were also changed to Rabbid noises. These soldiers/pikemen during the intro cutscenes, together with the Commander in Breach mode, would instead have their normal models, but wear Raving Rabbid caps. Dead Rabbids turn into chicken. The announcer for all gamemodes was also replaced with a Rabbid announcer, attempting to mutter the same lines except in Rabbid speak.

Toggling between menu items caused various Rabbid cheers and yells to be played. The main menu's backdrop was changed to have all sorts of items falling in the background, from confetti to sausages to innertubes. And during loading screens, a washing machine dropped between the two teams, with the sound of Rabbids being heard from it. Music throughout the game had been tuned into the soundtrack of the Raving Rabbid series.

Although there was a unique order prior to the event, there was no unique weapons for this event. However, players who played during this event got a Melee Pack as a reward.

Be the faction with the most Executions performed. 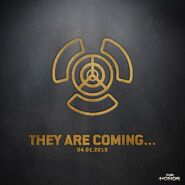 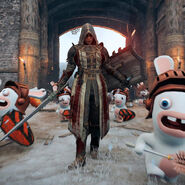 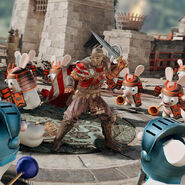 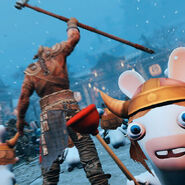 Add a photo to this gallery
Retrieved from "https://forhonor.fandom.com/wiki/Rabbid_Invasion?oldid=22651"
Community content is available under CC-BY-SA unless otherwise noted.