At a narrow pass nestled between two mountains, the Wu Lin once built a grand fortress to claim the strategic route. With mountains on either side, the defending army only had to protect one front until a catastrophe weakened the fortifications. Now attackers amass at Qiang Pass, determined to open a path for their invading forces.

The Emperor's prized Zhanhu, Sun Da, was using this portion of the Pass to conduct his experiments, with his laboratory located in the middle of the map.

Qiang Pass, like other Breach mode maps, is a long map with three parts. Phase one is just outside its outer walls, phase two located in one of the inner yards between the inner and outer wall, with the final phase being the keep where the Commander waits.

Attackers have taken advantage of the catastrophe to tear the wall down for an invasion. While once a famed wall that had never been breached before, Qiang Pass now needs Defenders to ready up and take on the invaders. What lies within the fortress though remains a fiery secret to a select few...

In Breach, the Attacking forces have broken the walls of Qiang Pass, specifically where it makes a difference: where its fortified city is at. Now, they wage a full-out siege on the fortification. Defenders march out, with a Captain ordering the Archers to lay fire on the invaders.

The siege begins on the very wall that Qiang Pass is known for, which has been broken down by enemy forces. The broken section is at the most important location, where a small city and the Commander's Keep is located. Attackers come from siege vehicles to hop onto the great wall, while Defenders hop down from low platforms on the right side of the gate's upper floor.

Once the Attackers breach the outer wall, they will enter the Second Phase of Qiang Pass, the Outer Ward. Here, the rampart continues down the left side, once again lined with multiple buildings and structures, where all the three Archer Points are located. Under the first Archer Point is where the Shield Banner will spawn, while under the second Archer Point is an armory room that has the Healing Zone.

On the right side of the map is the Guardian Shrine, a large building that leads to an outdoors courtyard centered around a large tree. The left and right entrances are moon gates, built into a wall surrounding the outside area of the building. The Guardian will spawn in this courtyard. The ballista is located on the second story of the large building. All of the Boosts of the Second Phase happen to be located on the right side of the map, with the Speed Boost being between the Guardian Shrine and Attacker Spawn, Shield Boost right under the Ballista and the Attack Boost located on a Pavilion that is between the Guardian Shrine and Defender Spawn.

After the Attackers have successfully breached the final gate, they will reach the inner ward, where the commander awaits in a large open courtyard. Like most maps, this section is smaller than the previous sections. There is one archer point on the left side of the map, with the healing zone located right under it.

On the right side of the map, is the Ballista, located high in a pagoda, and only reachable by a set of stairs in the same building. Similar to other breach maps, the commander is unable to be shot unless he ventures past the statues guarding him.

There is also an underground section, beneath the central lane at the center of the Inner Ward. This underground area connects the sides of the Ward, while also housing the Shield Boost. 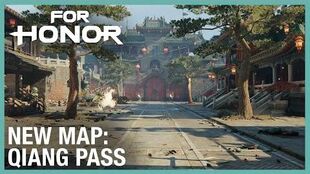