"Who am I, you ask? And who do I stand with? Covenants? Factions? Haha! You think too much! Look, I've got a good blade, a few tricks up my sleeve... and a nice crew."

"Call me an Outlander if you like. Stop asking, more fighting, mate!"

"Well, until we meet again. Get ready. 'Cause you're in for a wild ride."

The Pirates are a playable hero class in For Honor.

The Pirates are sea captains coming from Archipelago far from the land of Heathmoor. Each of them is a captain of their own ship, with hundreds of people relying on them for their survival. They are bold, bossy and passionate, but side with neither good nor bad. Fiercely loyal to one another, they ally themselves with anyone who can help them -- and they fight anyone who stands between them and their spoils with their cutlass and pistol.

After a string of dramatic climate changes, a new territory opened itself to the Pirates. For a very long time, they have traveled the seas and now, they have finally set their sights on Heathmoor. Armed with their signature cutlass and pistol, the only language the Pirates speak is of combat and chaos. No ship, harbor or warrior is safe from their ferocity.

The Pirates’ main hub is an island near the Wu Lin continent that serves as neutral territory, but they themselves can come from all walks of life. Once alone, abandoned or forgotten, they have formed a union. The water is the only home they know, and they are fiercely loyal to one another. Theirs is a family, found and chosen. Covenants? Factions? Legions? They have no interest in any of that. All they care about is getting rich. They ally themselves with anyone who can help them – and they fight anyone who stands between them and their spoils.

As they sail over the sea, the Pirates don't dress themselves in heavy armor that would rust to the touch of the salty ocean air. Instead, they wear attire suitable for a cosair: a tunic shirt, long pants, a cloth belt, boots, with a sleeveless leather frock coat on top of all that. What metal they do wear are shiny trinkets and arm protection. On their head, they wrap their head with a bandanna with an eye patch over their left eye. 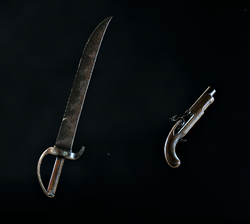 Cutlass and Flintlock Pistol - While their cutlass is no special sword, it does the job needed for the Pirates on the high seas. In their off-hand though is a never before seen weapon: the flintlock pistol. Although a ranged weapon, the Pirate utilize the pistol as a pair to their Cutlass in close combat. This combo yields a ferocious style of unrelenting assault.

The Pirates have developed a fighting style that is all their own by engaging with enemies from across the seas. Armed with their razor-sharp cutlass and one-of-a-kind pistol, they engage their opponents with a rush down style that can be relentless. They apply continuous pressure by mixing Pistol Blast and Heavy Attacks that Chain one after the other.

Available Perks for the Pirate can be viewed on the Perks page. 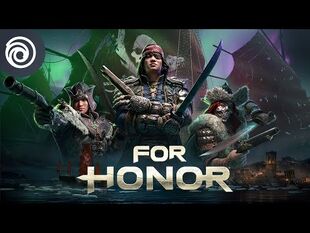