View source
watch 01:23
For Honor Trailer: The Peacekeeper (Knight Gameplay) – Hero Series #9
Do you like this video?
Play Sound

"When wars end, it is the silent blade that keeps the peace. But when wars rage, a peacekeeper's work is never done. Quick, lethal, they can win a fight before the enemy even knows they're there. Dancers of death with dual blades for dancing partners. Selected from the desperate, the humble, or the devoted. Sworn to secrecy by unbreakable oaths; what they know could destroy legends... or create them."

Peacekeepers are a playable hero class in For Honor.

Quick, lethal, and can win a fight before their enemy even knows they are there. It takes a special type of warrior to be a silent blade. Theirs is not a legacy of glory. They are an instrument of death, wielded to turn the tides of war. You may never see them. But you will feel the difference they make and the trail they leave behind.[1]

The Peacekeepers wear light leather with hints of mail underneath. They are equipped with armored shoulder plates and shin protectors. They wear a helm with a cage visor and a brown hood to conceal their faces.

Sword and Dagger - The combination of sword and dagger gives the wielder deadly counter-attacking ability. What the dagger lacks in damage, it makes up for in speed and versatility.

Peacekeepers are fast, maneuverable, and deadly. They use their dagger to follow up Heavy attacks or to feint them, inflicting Bleed Damage to their opponents. Once the opponent is bleeding, the Peacekeepers will be able to go on the full-offensive as their attacks become augumented.

Available Perks for the Peacekeeper can be viewed on the Perks page.

A Peacekeeper alongside a Warden, a Conqueror, and a Lawbringer. 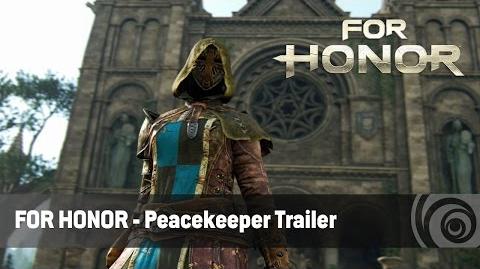