View source
watch 01:14
For Honor Trailer: The Orochi (Samurai Gameplay) - Hero Series #4
Do you like this video?
Play Sound

"We samurai are outnumbered. Each of our warriors must be the match of ten of our enemies. Each Orochi is a match for a hundred. Swift, strong, truest masters of the katana, they move like shadows with lore taken from the ninja clans. Their armor; a perfect balance of flexibility and strength. Orochi: they are the finest warriors the world has ever known."

For the single player campaign character, see: The Orochi

Orochi are a playable hero in For Honor.

The Imperial assassins of the Samurai. They roam the battlefield like ghosts, terrorizing and slaughtering those unfortunate enough to cross their path. Lightly armored and trained in the arts of stealth and deception, the Orochi dispatches enemies with a katana. Usually loyal beyond reproach, the Orochi holds the darker samurai secrets of dealing death in myriad ways, from throwing deadly knives to using a poisoned blade.

A perfect balance between flexibility and strength, the default armor is composed of laqured wood that cover most of the body with worn leather and cloth underneath. They wear a traditional kabuto, though it lacks any sort of tehen kanamono or decorative crest. Their dull gray mempo is simplistic and covers their mouth and nose, with dashes of tan paint that gives the image of sharp teeth.

Katana - The katana is the archetypal single-edge curved sword of the samurai of the Dawn Empire. They are made of laminated steel of the highest quality and are often honored as family heirlooms that warriors pass down to their firstborn.

Orochi are very agile katana-wielding samurai who has an arsenal of dodge attacks at their disposal. They offer a good mix of harassment and counter-attack abilities but require skill and timing to have an effective defense.

Available Perks for the Orochi can be viewed on the Perks page. 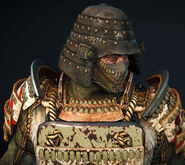 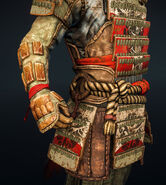 A Orochi alongside a Kensei, a Shugoki, and a Nobushi. 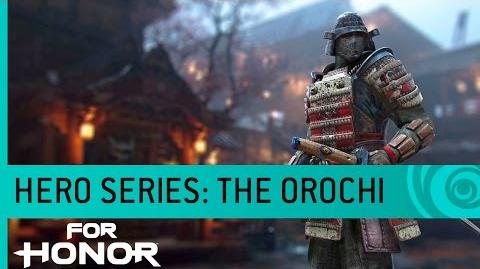 For Honor Trailer The Orochi (Samurai Gameplay) - Hero Series 4 US