View source
watch 01:23
For Honor Trailer: The Nobushi (Samurai Gameplay) - Hero Series #10
Do you like this video?
Play Sound

"Villages far from the safety of our castle still need protection. But how can our armies protect the people when we samurai are so few? Nobushi: elegant, aggressive fighters with the lightest of armors and the most exotic of weapons: the naginata. They seem hardly battle ready, but looks, in this case, are profoundly deceiving. They keep our wilds safe and we don't even know who they are."

Nobushi are a playable hero class in For Honor.

The defenders of the villages too far from the Imperial City for the army to reach. They are elegant fighters with a curious weapon. They have the lightest armor that allows them to move like the wind but cannot take a lot of damage. But don’t let their appearance fool you, they are one of the most effective fighters the Samurai have. [1]

The nobushi appears to be mostly wearing leather and cloth with a gray knee-length jinbaori (Samurai coat) on top. They possess two small sode, Japanese shoulder protectors, on their shoulders.

They wear a mouthless noh mask and an amigasa hat.

Naginata - The naginata is a long weapon consisting of a wooden shaft topped with a curved blade, with a round handguard (tsuba) between the blade and shaft. It is an extremely versatile weapon in the hands of a trained warrior and can be used to stab, bash, or hook enemies.

The Nobushi is a Zone Character as they can strike from a safe distance with their Naginata. They rely on being elusive with their Hidden Stance, poking at their enemies with bleeding attacks that help them deal more damage.

Available Perks for the Nobushi can be viewed on the Perks page.

A Nobushi alongside a Orochi, a Kensei, and a Shugoki. 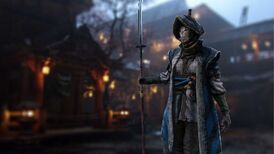 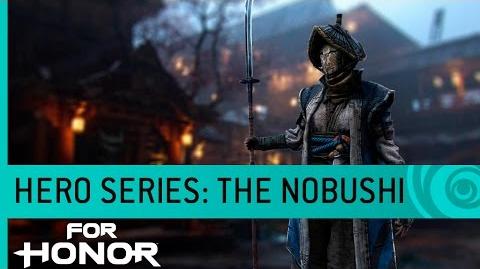 For Honor Trailer The Nobushi (Samurai Gameplay) - Hero Series 10 US