For Honor Wiki
Register
Don't have an account?
Sign In
Advertisement
in: Lawbringer, Gear, Heroes,
and 2 more
English

View source
watch 01:18
For Honor Trailer: The Lawbringer (Knight Gameplay) - Hero Series #12
Do you like this video?
Play Sound

"Where order has broken down, where cruelty and lawlessness rule, Lawbringers are justice. They go wherever they are needed, and they come prepared. Their armor has no equal, its construction a secret of their order. And they carry the most versatile weapon ever invented: the poleaxe. Pray that you do not need them. And when they arrive, pray that you have done no wrong."

Lawbringers are a playable hero class in For Honor.

The Lawbringers are justice in Ashfeld. They enforce the laws and dispense punishment and retribution without mercy. Their armor is without equal, their signature weapon a grim reminder of the ultimate punishment for lawlessness. They will go wherever they are needed – pray that you are on the right side when they arrive.[1]

Lawbringers wear full body plate armor with mail underneath. Their default helmet bears resemblance to a close helm with a large visor. There are emblems embroidered on the front and back and a medallion hanging from a chain can be seen in the front.

Poleaxe - The poleaxe is one of the most versatile weapons ever made. The axe has a sharp end for slicing and a blunt end for bashing and the spike on top that makes it perfect for thrusting attack.

The Lawbringer combines the features of a Heavy and a Vanguard Hero, having a great range with their halberd while being an effective counter-attacker. They have a vast variety of attacks they can use after a parry, and a number of tools in their basic kit to keep the pressure on.

Available Perks for the Lawbringer can be viewed on the Perks page. 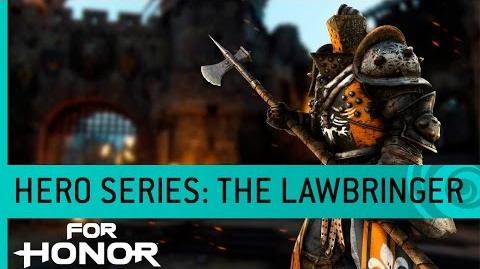