"To live as a soldier or die as a hero. To protect the past or fight for the future. To strive for the heavens, or carve a path to hell. The crux lies in everyone's heart, but it is also a gift."

"The ability to choose and adapt... to be neither or both. To breathe and fight like the wind. This is our freedom."

Kyoshin are a playable hero class in For Honor.

Children with unusual characteristics are sometimes believed to be born Yokai and treated as outcasts among their peers. But one of the ways for them to survive is to join the Kyoshin priests. In an isolated temple deep in the Myre, these abandoned infants find a new home among people who can understand and nurture their potential. Becoming apprentices of the elder Kyoshin, they follow an ascetic training to expand their physical, mental and spiritual abilities. When they reach adulthood, they go through a ritual called the ‘Heavenly Revelation’ where, according to legends, they must let their body be possessed by Samurai deities. While traveling between realms and learning secrets about the spiritual world, they vow to serve nature’s harmony, and finally return to humanity blessed with transformative powers.

Before the great drought, the Kyoshin were rumored to be masters of disguise – they could be anyone, anywhere. Some warriors doubted they even existed. Yet the great catastrophes and new conflicts in Heathmoor forced the Kyoshin to leave their temple. While many warriors try to choose between good and evil, the Kyoshin are determined to keep the balance of nature and will join any side to achieve their goal.

The Kyoshin are masters of disguise, dressing as either other warriors or as civilians. Their main attire is the robes of the Samurai high class. This attire is the kamishimo ensemble, which includes a kimono top, the kataginu jacket, and hakama pants. To hide their supernatural eye, they wear a partial blindfold. For protection, they wear metal shoulder plates and forearm guards.

Shikomizue Blade and Scabbard - A single-handed sword that is concealed within an undecorated scabbard. Due to its straight edge, the concealed weapon can deceivingly look like a harmless stick until it is drawn. The Kyoshin use this blade both in the overhand and underhand grip.

The Kyoshin are legendary Samurai who have a deep connection to the spiritual realms. Their special training led them to master the art of fighting with a concealed blade, the Shikomizue. While they flow through battle wielding their sword and scabbard, they use heavenly powers to gain the upper hand against the enemy. Their special Kaze Stance can block incoming attacks and allow them to retaliate quickly.

Available Perks for the Kyoshin can be viewed on the Perks page. 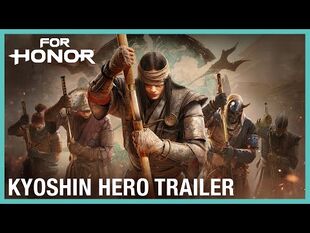