"We are the guardians of our people. We stand strong against all invaders. Duty is our shield, order: our weapon. When we defend the weak, we are...immortal."

The Knights are one of the four playable factions in For Honor. It is their belief that many, if not all of the ancient ruins were constructed by their ancestors. The Knights had been scattered for centuries but have begun to reunite under a single banner, that of the Iron Legion. There are those still, however, who choose to gather their own "Legion", and their alliance with the Iron Legion is shaky at best.

Though seen as a single group, the Knights are hardly unified. There are many Legions in Ashfeld, the most prominent being The Iron Legion.[1] Each Legion is an independent army that serves to protect and rule over a specific area, usually around their largest fortress or Sanctuary. Each Legion has its own Circle - a group of highly ranked individuals who serve as advisors for the Legion and their warlords.

For Knights, honor and duty go hand-in-hand. Oaths were not lightly broken and many knights serve warlords they do not look highly upon. Honor was not tied to imprisonment as doing so was considered an act of mercy.[2]

"Bound by an unbreakable oath, We have sworn to defend our homeland to the death. Those who dare attempt to seize it, will be pacified by steel. We are the righteous, avowed to shield the weak from the wicked. Where lawlessness and oppression reign, we deliver swift and uncompromised justice. We are the noble knights of the Iron Legion. Stand with us, or be judged by our blades."

The Knights wear a mix of various cloth, chainmail, and plate armor pieces in the game. Before advancements in technology, they wore chainmail hauberks of the 11th century.

Longsword - The long sword is a straight doubled-edged sword with a crossguard. The heavy pommel at the handle is for balancing, making the center of gravity near the handle. It can be wielded both with two hands and one. The pommel and crossguard also allows what is called 'Mordhau' (murder-stroke), flipping the sword upside down to swing it like a club or pickaxe.

Flail - A weapon that was difficult both to master and to fight against, the flail was a heavy metal bludgeon, sometimes spiked, connected to a wooden handle by a chain. If used in the wrong hands, this weapon could doom its wielder.

Heater Shield - Wooden shields were an excellent defense tool and not as unwieldy as one might believe. With it, warriors could simultaneously attack and defend, crashing into their foe if all else fails.

Short Sword & Dagger - Quickly drawn and swift in execution, this set of blades made up its lack of lethality with its enabling nature of rapid successive strikes. This weapon was ideal for duels, as the dagger was for defense, and the sword for offense.

Poleaxe - These medieval polearms consisted of an axe with a pike connected to a long wooden shaft. These aspects allowed its wielder to strike from a safe distance with great force to even pierce armor, or swing wide with might.

Gladius - The standard issue weapon of the Roman centurions. This short sword was swift and quick, allowing the soldier to engage in close combat with a primary focus in quick slashes and thrusting.

Trident & Buckler - A polearm with three prongs designed for quick jabs and thrusts, along with the ability to bludgeon with the end of its shaft. Meanwhile, although smaller than other shields, the buckler provided just as much protecting as larger shields when in the right hands.

Arming Sword & Kite Shield - The weapon of choice of the Black Prior is the sword. But their iconic kite shield is where the true foundation of their technique of battle lies. Tall and sturdy, the kite shield granted full protection, although not as versatile as smaller shields due that height.

Bardiche - A polearm with a distinctly long blade edge for its axe-head, Holden Cross picked it up as it was reminiscent of the poleaxe he stopped using. 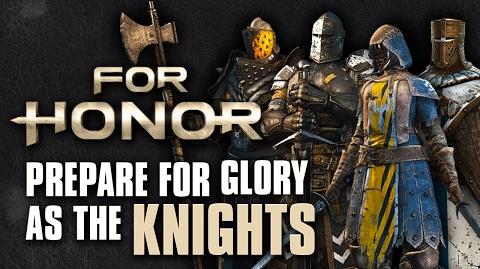 For Honor- Prepare For Glory As The Knights