View source
watch 01:15
For Honor Trailer: The Kensei (Samurai Gameplay) - Hero Series #1
Do you like this video?
Play Sound

"Every army needs warriors whose specialty is victory. Kensei-sword saints: the guardians of our people. Every great ruler since the fall has trained as a sword saint... every one. And they are formidable. The nodachi was long thought too long too large for use in real war. They proved them wrong. Their armor is the strongest of our people... as is their will."

Kensei are a playable hero class in For Honor.

The living incarnations of Bushidō, the samurai way of the warrior, or as close as one can get. Masters of multiple martial arts, they are trained from infancy to fight and die for their emperor or their fellow samurai without asking why. Kensei wear heavy armor and fight with the nodachi, a longer version of the katana that cleaves enemies in a few elegant and powerful strikes. Kensei spend their lives fighting and training as they strive to attain a level of perfection few other warriors can ever hope to achieve.[1]

Over the hakama, the cloth clothing they wear under all their armor, the Kensei wears a lacquered wooden cuirass and a gray sleeveless coat on top of this. A katana and wakizashi can be seen sheathed at his waist under his obi sash, although they are not used in combat in-game.

The Kensei can always be easily identified thanks to their massive sode that hang off their shoulders. Their kabuto has a crescent crest at its forehead. Their face mask is known as Mempo. It is constructed from iron and/or leather, and covers the face from the nose to the chin. The Kensei's Mempo, in particular, is red with a lacquered finish, featuring a mustache, a soul patch and fierce teeth, meant to serve as both protection and an effective method of intimidation against foes.

Nodachi - The nodachi is longer than the classic katana. It was initially designed to be used by a foot soldier to kill the horse of cavalry. Kensei samurai of the Dawn Empire have the strength and necessary skills to use them as effectively as the katana.

Kensei are balanced Samurai warriors armed with the nodachi. They are slower than other units but have longer melee range. They provide interesting defensive abilities and deliver devastating attacks through their Top Heavy mix-ups.

Available Perks for the Kensei can be viewed on the Perks page. 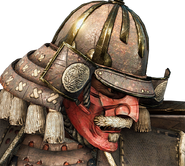 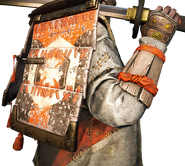 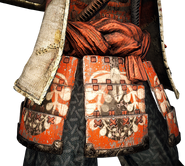 A Kensei alongside a Orochi, a Shugoki, and a Nobushi. 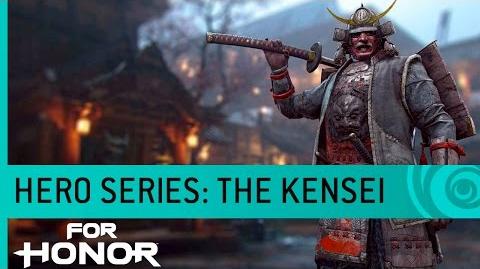 For Honor Trailer The Kensei (Samurai Gameplay) - Hero Series 1 US