Kazan Castle was once protected by the blessings of the fire god Kagutsuchi. An expansive city developed around it, hundreds flocking to the castle gates every day to pray in the shrine.

Samurai from far and wide came to train in its serene gardens, honing their skills away from the the battlefields. The castle remained untouched by the faction wars for years, but no longer. Gone are the faithful, only enemies knock on the gates now.

Kazan Castle, like other Breach mode maps, is a long map with three parts. Phase one is just outside its outer walls, phase two located in one of the inner yards between the inner and outer wall, with the final phase being the keep where the Commander waits.

The Attackers have invaded the village that sits right outside the fortifications, and now aim to take the castle as their own. The squared corners this fort offers may give the Defenders an organized edge, but they should still remain wary. At the end of the day, the blessing of the fire god will fall into the lap of the victor.

In Breach, the Attackers have traversed the city and are ready for the final assault. They stand next to the ram as they chant, slamming their pikes to the ground. Inside, the Defenders come under assault from artillery pieces. A pikeman rush to the wall, spotting the army and alerting the fortress. The Attackers finish their chant with one final cheer.

Phase one takes place in the village outside the castle. Many of the houses destroyed serve as archer points that overlook the path to the gate. A wall has been destroyed by artillery fire and created a ramp up above the gate. The houses on the other side are relatively intact and hold the healing zone as well as a shield banner.

Once the castle is breached, the battering ram will have to make a long stretch to reach the keep. Bridges connect both sides of the main path, one of the bridges holding the shield banner. The healing zone sits in front of a dojo that sits opposite of the archer points and within the dojo is the Guardian. Close to the final gate is a ballista.

In the final phase is the keep. There is only a single archer point. Warriors can also take the zipline across to reach a small tower with a healing zone at its base and a ballista at the top. The only thing that stands between the ballista and the Commander is a bell. 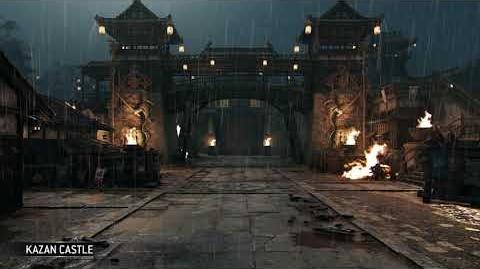