"Wretched warriors... nothing more than flesh and bones. You no longer need to suffer... I offer you peace and salvation. Be not afraid... your soul is now mine!"

The Hitokiri is a playable hero class in For Honor.

The Samurai have a name for former executioners – Hitokiri, a word that means “manslayers” with no heart.

These ghostly warriors have lost all faith in humanity. They wander the land clutching their masakari, the mighty axes they used to sentence criminals.

Their presence on the battlefield spreads a dark cloud of death that can terrify all enemies.

The Hitokiri wear Japanese ceremonial garbs made of leather, linen and cotton, coloured with ashen grey and crimson, with rope bindings for both their upper body and limbs. With lacquered steel armor covering the shoulders, forearms and shins, they also wear a large waistcloth known as the uwa-obi, eerily decorated with white puppet heads which symbolize the victims they've executed.

The mask they wear is completely white, with a face that is both ominous and sunken, lacking any sign of remorse or emotion. The ropes for the mask is lined with cloth streamers, and on the mask's face, a reminder of their status as executioners is etched upon it.

Masakari Axe - This large double-headed axe has been used by the Hitokiri to deal the death blow in executions. Although heavy like the Kanabo, using its two heads to the weapon's full capacity requires a truly skilled manhunter.

The Hitokiri are relentless executioners. Wielding the Masakari, the Samurai battle axes, they can enter a special state to chain uninterruptible heavy attacks infinitely and perform special moves. They dictate the flow of combat with charged attacks, uninterruptible moves and a core bash mix-up.

Available Perks for the Hitokiri can be viewed on the Perks page. 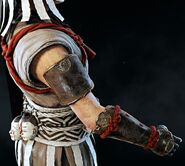 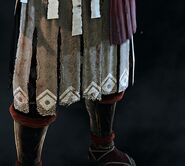 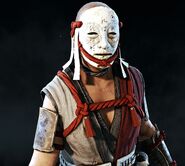 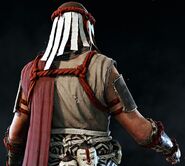 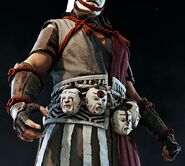 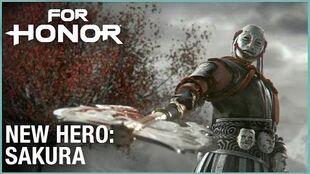