View source
watch 01:13
For Honor: Season 3 - The Highlander Gameplay Trailer
Do you like this video?
Play Sound

"Like the rocks that break the waves, Highlanders have weathered many storms. Ancient alliances kept their lands safe but their owes have come due. They join our war out of obligation but they are not to be underestimated. Their claymore is the heaviest sword ever wielded. It can cut down even the most armored warrior. The elements battering their lands have made them strong. War has made them deadly."

Highlander are a playable hero in For Honor.

The Highlander is not a typical hard-headed Viking. Ancient alliances and obligations have pulled them into this war, otherwise they would have remained guarding their homelands. They can stay in a defensive posture and stand toe to toe with the fiercest of warriors, weathering the flurry of blows with their claymore... until they see a momentary weakness and then they pounce, displaying their true strength and speed revealed with sweeping strikes and heavy blows. They are never going to be the first to jump into battle, as they will plan each move and always be ready to counter. The mountains have made them hard and resilient; war has made them deadly.

Highlanders have most of their armor covered by their clothes but some scale armor can be seen. They have a fur cape and a metal head band. Their pauldrons and greaves are made of leather and they wear their signature kilt.

Claymore - The heaviest and longest sword on the battlefield. It slashes through the defenses of the opponent's shield and armor like butter.

The Highlander is a stoic warrior with exceptional strength and an almost infinite patience. He stands like a rock weathering a furious storm but can strike like a crashing wave when an opening presents itself.

Available Perks for the Highlander can be viewed on the Perks page. 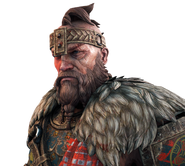 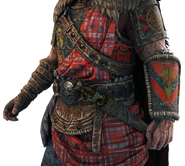 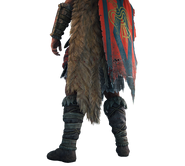 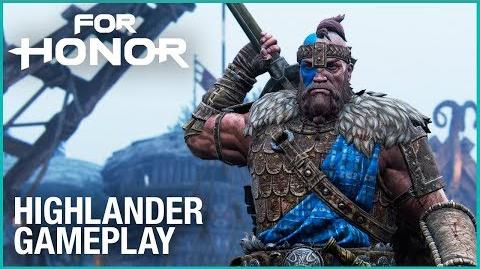 For Honor- Season 3 - The Highlander Gameplay - Trailer - Ubisoft -US-