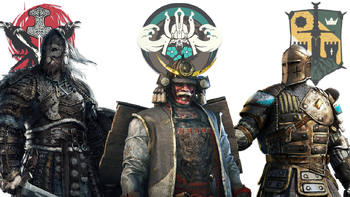 Heroes refer to the playable characters in For Honor.

There are currently four Hero types; each faction comes with a base of four Heroes, one of each type, with additional heroes that have come and continue to come as DLC.

Each Hero comes with their own set of skills, weapons, armor and fighting style. Every hero is different and will fulfill different roles, even within their own class. With a wide library of customization options, players are able to personalize their Heroes to not only look and feel unique, but also be tailored to one's preferred combat style.

The Knights, also known as The Iron Legion, believe that many, if not all of the ancient ruins were built by their ancestors. The Knights had been scattered for centuries but have begun to reunite under a single banner, that of the Iron Legion. There are those still however, who choose to gather their own "Legion" and their alliance with the Iron Legion is shaky at best.

The Knights take a balance between skill and strength in their fights, valuing both as necessities in war.

The Vikings, also known as The Warborn, were previously thought to have vanished. Now they have returned - in great numbers - from across the sea. They have come to take new lands, plunder, expand the clans and reclaim their ancient homeland in the North. Hundreds of clans now dominate amidst the cold and icy tundra.

The Vikings are headstrong, thriving by jumping into the fray instead of placing second thoughts before every encounter.

The Samurai, also known as the Dawn Empire, come from a land far to the East, and they tell a tale of a homeland and an Emperor that were lost to sea and fire during the last great Cataclysm. Now, more than a millennium later the nomadic warriors roam no more and have rebuilt themselves in a new land with a new Emperor who rules over numerous house families.

The Samurai are few in numbers, thus their warriors favour attaining finesse and skill than sheer physical strength in their battles.

The faction known as the Wu Lin is made up of warriors from ancient China known as the Celestial Dynasty, who now travel west seeking respite from war, betrayal, and personal tragedies. They may not have a home in the faction war, but still fight for their own cause.

The Wu Lin do not submit to brutality and violence in all that they've faced, bringing a flowing art to their fights backed by solid resolution.

The faction that comes from the great beyond, the Outlanders is an assembly of an assortment of backgrounds, with no affiliation to any known faction or alliance, even to each other. The name is given to these strangers who come from these varied cultures.

As a result, they bring to Heathmoor techniques and technology that are foreign to the warriors.