A port town on the shores of Lake Eitrivatnen, Harbor marks a key strategic location that members of the Black Prior once helped the Knights defend against their enemies.

Ruthless strategies helped them win battles against impossible odds. The port still holds immense strategic value for its location and continues to be a highly contested area.

The Harbor is a square map, with five recognizable locations, one set in each corner of the map and at the center. In the far corners are the Storehouse where the invaders have landed for their assault and the Barracks where the defendants come out to hold their ground. In the other two corners are the Lookout and Market. At the center of the map is a Trireme ship, a single docked ship where the main battle occurs atop its deck. Access between all these critical points are fluid, especially with the ziplines that are just above the Trireme deck, granting a speedy way to travel to either the Market or Lookout.

With plenty of pitfalls and ledges on the map, be it as a drop to one's own death or to initiate death upon a poor soul below, one should remain aware where they are on the map. The Market side of the map uniquely has small pits of fire to be careful of.

Battle ensues atop the deck of the Trireme, with soldiers beating at each other for an edge in the fight. One such brawl has ended with the other hanging by a rope around one ankle. Meanwhile, a single attacking soldier fights a defender between the Barracks and Lookout. Although for a moment, the attacker has an edge, the defender hauls the attacker overhead with his shield, throwing him down a wooden ramp that goes down to the Docks that surrounds the Trireme, knocking aside Attacking reinforcements who were trying to walk up this ramp. And as the Defender's reinforcement arrive, they nod to each other before charging down the ramp. 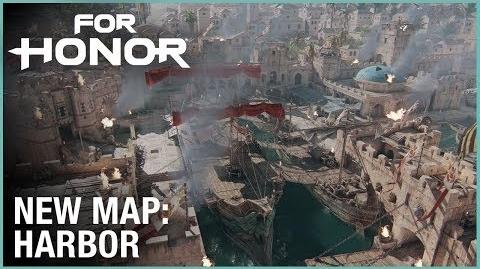