There is a Viking legend about a great warrior who single-handedly won against an army of Knights and Samurai. With his mythic sword, he cleaved through enemies until all were defeated and only he remained standing.

They say this place was built in his honor and that his tomb lies out here in the open. But, the hero’s true name has been lost to the ages. Once sacred and impenetrable, the Hallowed Bastion has seen countless battles through the years. It’s a strategic prize for any army.

The Hallowed Bastion, like other Breach mode maps, is a long map with three parts. Phase one is just outside its outer walls, phase two located in one of the inner yards between the inner and outer wall, with the final phase being the keep where the Commander waits.

The field in front of the bastion has a small network of trenches that allow warriors to traverse the field with minimal resistance. There is a healing zone in a tunnel directly under the attacking lane. A shield banner also lays in the trench. An outlying sentry post provides easy access to the rest of the fortress, a ramp leading directly onto the wall. Archers points are dotted in the post and along the wall as well.

The Viking fortress has lookouts and even a meeting chamber built into the cliff face. These locations have become excellent archer points. A tower near the gate holds the shield banner. On the other side is a demolished stave church where the Guardian resides. The healing zone is right outside the church.

In the keep is a massive courtyard with a single archer point. There are small caves near the center that hold boosts for either team. Across from the archer point is the ballista. All that stands between the ballista and the Commander is a statue. Behind the ballista is the healing zone.

In Breach, the Attacking army have gathered around the battering ram, awaiting for the final order to begin their assault. An army of archers behind them unleash a volley of arrows. The Defenders inside spot the army and the arrows that blot out the sky. The Pikemen form up, their shields protecting them as the arrows rain down on them. With the initial volley complete, the attack begins. 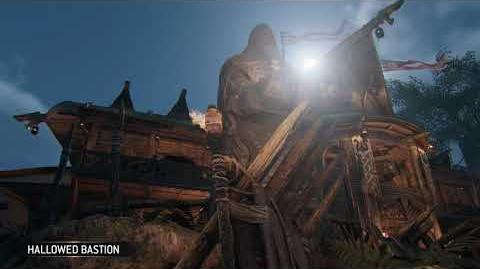 F01 Hallowed Bastion
Add a photo to this gallery
Retrieved from "https://forhonor.fandom.com/wiki/Hallowed_Bastion?oldid=27679"
Community content is available under CC-BY-SA unless otherwise noted.