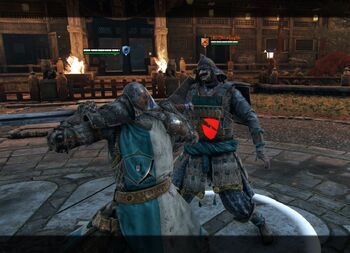 Guard Break is a gameplay mechanic in For Honor. Using Guard Break allows the player to make an attempt at disrupting the opposing player's stance. If successful, the player can follow up with either a throw in a desired direction, or an attack. Any hesitation will negate the opportunity as the opponent will counter guard break.

A Guard Break (also written as Guardbreak or GB) is a maneuver that attempts to break the opponent's stance as your Hero grabs hold of them. Guardbreak typically have strong tracking and forward momentum, preventing players from simply dodging the maneuver unless they move greatly out of range (such as through backrolling). A Guard Break is initiated either through the (X) button for XB1, ⬜ for the PS4, or the Middle Mouse Button (MMB) for PC.

Guard Breaks are 400ms in speed, but become 300ms if performed right after a Feint. They cost 15 Stamina, even if Counter Guard Broken. However, if it misses, it will cost an extra 11 Stamina for a total of 26 Stamina.

While the main purpose of the Guard Break is to be used on Heroes, it can also be used on NPCs such as the Commander and even Minions. 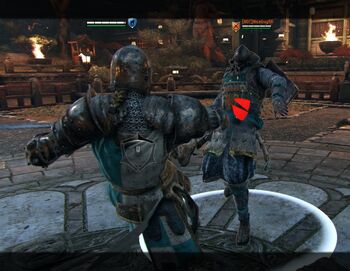 Upon a successful Guard Break, you can throw the opponent in a desired direction with the Guard Break + Direction inputs. Throwing a Hero into a wall or another Hero will stun that Hero temporarily (if thrown into another Hero, both Heroes will be stunned), giving a chance to spring an attack on them. However, while they are staggered, they are also Guard Break Invulnerable to prevent Guard Break spamming.

Throwing costs 18 additional Stamina, but inflicts 20 Stamina damage (damage inflicted varies between Heroes, but is typically 20) on your opponent. Throw distance depends on the Hero, with some being able to throw really far away while others only throw short distance. While throwing your opponent, you will not flinch from normal attacks (Bashes will knock you back).

All Heroes are able to perform a Light, Heavy or Zone Attack upon Guard Breaking the opponent, with the Light Attack always being guaranteed. Certain Heroes will have special follow-ups instead that only they can perform. More listed in the Tactics section below. 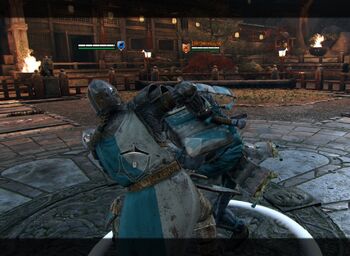 While not advised, backrolling is a possible strategy in avoiding a Guard Break as the backroll is invulnerable to Guardbreaks unlike normal Dodges.

While in Revenge Mode, your Guard Break will ignore the target's Guard Break Invulnerability window. Together with the Uninterruptible Stance you get through Revenge, this allows you to Guard Break an opponent who is performing a chain of attacks.

Throwing an opponent while in Revenge will also cause them to fall to the ground as if they are Exhausted.

Guard Breaks are useful in performing mix-ups, especially once you have mastered Feinting. Because Guard Breaks after a Feint are faster than a Guard Break from neutral, you can use this to fool an opponent to parry your Heavy Attack, only to feint into a Guard Break. This is especially useful for Exhausted or almost Exhausted Opponents, since they cannot cancel their parry attempt, and when thrown by a Guard Break, they will fall to the ground.

Guard Break Throws are also a useful tool for displacing an opponent. This is particularly the case when you can throw them into a wall for a Stagger or, better yet, into map hazards. Many map hazards exist in For Honor, and should be taken advantage of when you can throw your opponent into them.

The following Heroes have special follow-ups to Guard Breaking an opponent that they can use to their advantage: