"Some of you have known me under other names, like the name of some callous demon or a name of a foolish knight. Yet today, I have another name. It was given to me by people who could have left me to die. But instead, they taught me the true meaning of courage."

"So, listen to me, warriors. Don't let some mad tyrants play God with your lives. Fight for the people who saw the good in you. fight for those who will want to remember you. "

"Come on, warriors! Show them how you fight!"

Gryphons are a playable hero class in For Honor.

Some say you cannot teach an old dog new tricks, but this could not be farther from the truth for the one who was once known as Holden Cross. The well-known veteran went on a transformative journey across Heathmoor after leaving the Lawbringers. Fighting as a mercenary, he encountered warriors from all factions, who set their differences aside and taught him more than he could ever imagine. They even gave him a new name – Gryphon, the warrior with the heart of a lion and the piercing eyes of an eagle.

Today, Gryphon is determined to make amends for his past life as a Blackstone by helping the Chimera Alliance become a beacon of hope in these dark times. Using the Draconite abused by the Horkos against them, Gryphon will guide the rebellion to victory.

Since he left the Lawbringers, Gryphon has worn improvised gear. With the help of his mercenary friends, he scavenged battlefields and adjusted pieces he could find to create his own armors. His preferred attires are usually not too sophisticated, emulating the culture he takes the armor from. He favors function over form, but sometimes wears ornate pieces that were gifted to him by former patrons and allies.

Bardiche - A polearm with a distinctly long blade edge for its axe-head, Holden Cross picked it up as it was reminiscent of the poleaxe he stopped using.

A well-known veteran returns to unite the Alliance against the Horkos. The one who is now known as 'Gryphon' has traveled far and wide, learned fighting techniques from warriors across all of Heathmoor and added his own deadly twist to them. Wielding the bardiche, this charismatic leader excels in all situations and keeps his allies alive to fight another day.

Available Perks for the Gryphon can be viewed on the Perks page. 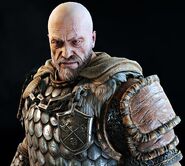 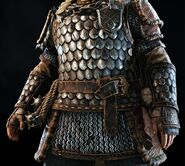 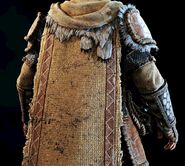 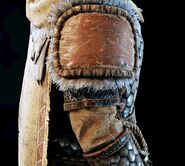 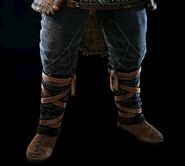 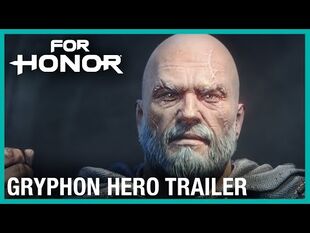