View source
watch 06:55
For Honor - What Makes 1v1 Duels so Intense
Do you like this video?
Play Sound

Show the world who the best warrior is. You and another will face off in a one on one battle of skill.

Duel is a 1v1 multiplayer game mode in For Honor, solely a battle of skill against skill. No running or hiding, just two players battling to the death. Players who are not aware of their environment can find themselves backed off or thrown from a cliff or wall, skewered on spikes or shoved into a fire. Every round starts in a different location, so the environment will also be different.

Blocking, guard breaking, charging and the ability to quickly read your opponent are key in this quick, intense and strategic style of gameplay. Players will not only need to change their style based on the class of character they play but also the class they face.

PC players will not be able to duel friends and will be required to use the matchmaking system to find opponents.

Opponents can be other players or an AI.

There will be five rounds in a match. Kill your opponent to win the match. If the match takes too long, it is declared a draw. But don't think this means you can run. If you run for too long, you will receive a debuff that slows you down and drains your stamina. If both warriors kill each other simultaneously, it is also a draw.

Whoever can win three matches is declared the winner. 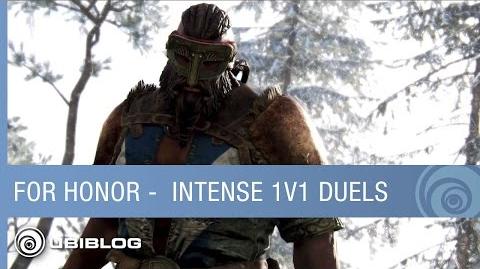 For Honor - What Makes 1v1 Duels so Intense? US
Deutsch Español
Community content is available under CC-BY-SA unless otherwise noted.
Advertisement