View source
watch 01:05
For Honor Trailer: The Conqueror (Knight Gameplay) - Hero Series #6
Do you like this video?
Play Sound

"In desperate times, conscripted criminals refill our ranks. Sometimes, however, you find a diamond in the rough. The most elite earn their name: Conquerors. Strong as a battering ram, resilient as a fortress gate, their flail is as dangerous to the wielder as it is to the enemy. But in the right hands it becomes... unstoppable."

Conquerors are a playable hero class in For Honor.

Ex-prisoners and forced conscripts who have risen to the rank of elite soldier. Originally pressed into military service as sword fodder, those who are skilled enough to survive are promoted out of the rank and file and given heavy infantry training. They are heavily armored warriors, relying on a defensive style with their Heater Shield and their massive flails to whittle away at their opponents until they fall under the Conquerors’ massive onslaught. Climbing from the lowest ranked to this prestigious role in the Knight’s forces, Conquerors have earned the respect of their peers through determination and feats of arms.[1]

The default Conqueror wears an Enclosed Helm, as well as steel spaulders and a pair of poleyns.  They wear a leather jerkin with some visible plating as well as a decorated cloth scapular.  Their forearms are wrapped in steel chain and manacles.

Footman's Flail & Heater Shield - The flail is one of the most vicious weapons used by the heavy infantry of the Iron Legion. They are made of heavy iron chains linking a stout wooden handle to a massive steel-spiked ball. The flail inflicts massive wounds through concussion as it crushes both armor and bones. In their off-hand, they use the Heater Shield both for offense and defense.

Conquerors are heavily armored fighters armed with a flail and a heater shield. They destabilize and overcome enemies through multiple defensive abilities and relentless attacks.

Available Perks for the Conqueror can be viewed on the Perks page. 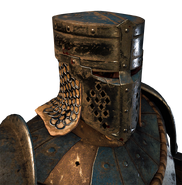 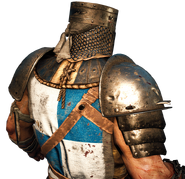 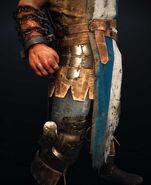 A Conqueror alongside a Peacekeeper, a Warden, and a Lawbringer. 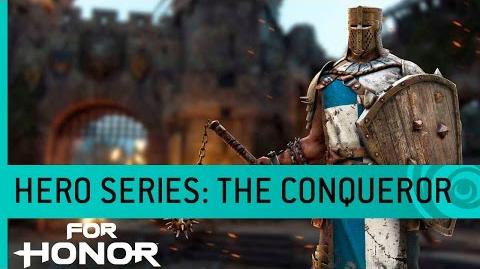 For Honor Trailer The Conqueror (Knight Gameplay) - Hero Series 6 US