Citadel Gates are fortresses that guard some the world’s largest cities. With external barracks and archer positions, they provide a solid defense to the tens of thousands of civilians inside.

Most of these massive fortifications were built at the time of the Great Empire to protect immense population centers. They show unmistakable Knight cultural influences and many were reclaimed by the Iron Legion as theirs by ancestral right, regardless of which faction occupied it prior.

The castle sits on the cliff of a hillside, with lines of walls after walls surrounding a keep. With troops marching just down the hill, the battlefield sits trapped between the forest below and castle above. A battering ram has begun smashing at the gate but it will need time to complete. Connected to the main gate is the courtyard where defending troops will rally. Immediately out the courtyard on the left side of the gate is a very empty armory. A stone bridge lines the side of the cliff and the gazebo are all in ruins. To the right of the gate, you come across the blue dome, which provides an excellent view across the battlefield. You can leave via a walkway passing just above battering ram and the main gate, take some ladders to the ground, pass into the inner stairway to the forest beyond, or walk over some ramparts that lead into the forest. 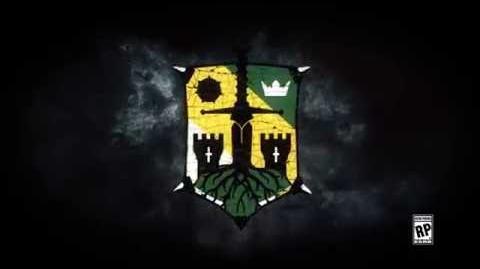