There was a time when villages like this one dotted the landscape in Ashfeld. When the volcano erupted, many of these villages were wiped off the map entirely. Some remained, but active lava channels make them uninhabitable.

Armies need sleep and shelter, and even a rundown village can hold strategic importance in the greater war. Warriors must be wary, though, as one false step could cast them into liquid hot magma.

Released as Village, the Cinder Mill is centered around the courtyard with its bonfire of corpses in the center. Surrounding it are burnt down houses, with trees that nothing but cinder as the flames of the lava river have reached their branches. Above the river of lava are broken bridges, with the signature windmill sitting nearby. At one end of this river on the map is the main gate, fortified with wood and leading out to the main road that passes by this village. On the other side of the collapsed homes are two iconic locations: the mines, which are abandoned and desolate, with the tools remaining as a memento that the village used to be bustling with work; the broken down church where an angelic statue resides within. 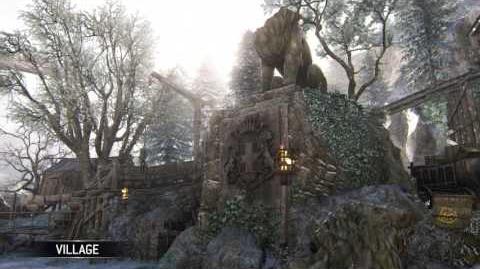