Canyons are natural landmarks that litter the world following the Cataclysm. Out of necessity, the people have been required in getting creative about bridging these massive divots in the landscape.

The Vikings seem to encounter these natural landmarks more often than their neighbors and have come up with the most elaborate ways to inhabit and traverse them.

A ceremonial stage sits at the center of the map, with a tall pole of goat, boar and wolf carvings in the middle as ropes extend out to the wooden fences and pillars that surround the stag. Near the stage, viking murals are painted upon standing stone slabs.

The forest that this place once was now has had half its trees cut down. On one corner of the map stands a viking warrior as a vigil statue, where on the opposite side is a hunter's lodge. Before the statue is the notable canyons, its rock faces carved out as heads of Viking ancestors, five meters tall. Bridges extend over these ravines, with bone covered posts littered about the other paths.

To the right of the statue is a lake, with a small dock extending above the water with small boats floating in wait. A larger boat sits upon land just to the right of the dock, the wood of its hull taken apart, leaving only a husk of what it was before. 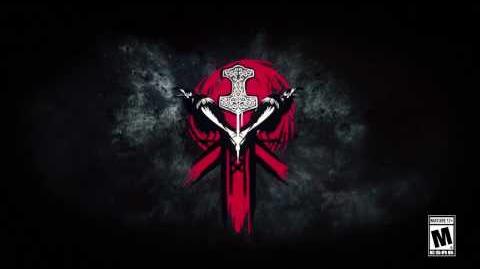