A secret Japanese monastery located deep in the valleys of the Myre, the Canopy is the source of many legends. One is about a group of Samurai settlers who had fled there and used the landscape to triumph over one thousand enemies. Another tale speaks of a mysterious deity that gave birth to the sacred grove before turning to stone. Besides its mystical aura, this isolated village is protected by natural barriers and has become a coveted refuge for all factions

Temples and shrines built on the cliffsides and above the trees, Canopy is a map filled with bridges and ziplines between points of the map. Square in shape, at the center of the map is the Bell Tower, a two stories temple building with a large bell at its center and an accompanying beam meant to strike the bell to toll. Its second story walls have been all torn down to allow individuals to walk atop its roof.

To the southeast is the Temple where the Defenders start at, with its gate open into its halls to reveal a large deity statue. To the Temple's west is the Cliffside Walkway, a two-story pathway that hangs right under a set of cliffside temples and between the map's two visible waterfalls, leading to the Prayer Tree. As its name denotes, the Prayer Tree location is the location of a large tree with lanterns hanging off its branches, with a two-storied structure surrounding it, the roof of the structure accessible by a ladder to make it much like it's three-storied.

From the Prayer Tree towards the north is the Entrance Gate, where the Attackers spawn. The Entrance Gate leads out to a path lined with bamboo. Stretching eastwards is the Cliffside Edge, a path that hides among two large tress, leading to the Eastern Shrine, a shrine that contains statues of divine foxes on both its frontside and backside. The Eastern Shrine is the last destination before looping back to the Temple.

In some gamemodes, the Temple's entrance and the Entrance Gate are blocked by burning debris.

The bridges and edges of the structures have many exposed ledges where you can push or be pushed down to a lower platform or into the ravine below. Meanwhile, paper cranes dangle from the roof corners of some the buildings and some of the trees around, as statues of deities are scattered about. At night, fireflies dance about below the Canopy as the lanterns are lit. 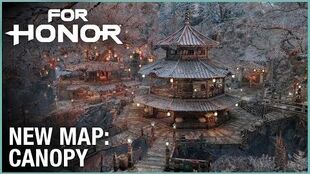