Get your taste of the true siege! Be it as a defender of the walls or the attacking battering ram!

In this game mode, a full castle siege is underway. Attackers and their forces must breach the castle and kill the Commander while the defenders must stop them.

This game mode has three sections (also known as phases), which typically represent how far the Attacker has progressed. Attackers get through the first two phases (outside the main gate, and the outer keep of the castle) with the battering ram as they successfully crash through the castle's gates. Meanwhile, the last phase is the inner keep where the final objective, the Commander, awaits for a last stand.

As a more strategic game mode that is meant to last longer than the others, Defenders are not left to just wait around for their castle to be breached. While both sides have infinite respawns during the first two phase, the Attackers will be under a Ticket System during the last phase based on their Ram's Health at the end of the second phase. Attackers can only win by killing the Commander, so if their ram is destroyed or they are killed off without respawns before they can defeat the Commander, the Defenders win.

All maps take place in a large fortress with several layers of fortifications, each layer separated by ramparts and a gate. The battle always starts on the outer rampart (the first phase) with the Attackers needing to breach each gate before moving forward. Defenders are tasked with defending each gate by dwindling the health of the Attacker's ram to eventually destroy it.

While there is one main path where the Attackers travel through, there are side lanes where Attackers and Defenders alike can roam in and out for smaller objectives, boosts and even rally flags. For both sides, there are visible directional lines that appear on the paths. These lines provide a basis for Heroes (orange for Attackers, blue for Defenders) on where they can move towards to capture points in the side lanes that control the archer points, along with the gate area for the first two phases.

If a Hero moves into an are of the map that is not related to the Objectives, such as moving into the second section of the map when the battering ram is still at the gates of the first section, the game will give you a warning. If this warning is ignored for long enough, your Hero will slowly lose health, eventually dying. This is to prevent Heroes from advancing into areas that have not started spawning yet or from lingering in previous phases of the game where there is no activity.

For the first two phases, the Battering Ram and the Gate are the primary objectives of importance for each side. If the Gate is breached, the next phase begins. However, if the Ram is destroyed, the battle is over.

The Battering Ram is the objective that the Attackers need to defend as they breach the gates. Initially during the first two phase, the Battering Ram will have to take time to travel to the gate. The progress of the Ram's travel depends on circumstances:

This also affects the charge time while the Ram is docked: The Ram takes up to 40 seconds to charge normally, 12 seconds if Enhanced, and will not charge at all if the Ram is either being damaged by Defenders with no Attackers nearby or if damaged by the Cauldron.

Once the Ram reaches the gate, it will smash the gate in intervals. If the Ram depletes the gate's health to zero, the gate will fall and the Ram is able to go through. When destroying the second phase's gate, the Ram will stop moving and disappear, as it is not needed anymore.

The Ram has a total health of 9000. Defenders can destroy the Ram in one of two ways:

Heroes can take part in damaging the Ram, but need to do so through either their Feats or the use of the Ballista.

Based on the Ram's Health at the end of the second phase, the Attackers will receive a designated number of respawn tickets as they fight the Commander. The number of tickets received is as follows:

Because the Ram does not heal between phases, defending the Ram and getting the Banner is a priority for the Attackers if they want to have as many Respawns in the last phase.

The Gate is the objective that the Defenders need to defend, preventing Attackers from moving further. Although Defenders will not have to worry about the Gate at the start of each phase, they should be mindful in preventing the Ram from reaching it. If the Ram does reach the Gate and docks, their efforts to slow down and destroy the Ram should be of upmost importance.

The Gate can take up to three hits from the Ram before breaking through, with Banners granting the Gate the ability to take an extra hit. The Ram is the only means for the Attackers to damage the Gate.

Lining the sides of the main path are a series of archer points, also known as Ramparts. Whoever controls these Archer Points will have Officers, Pikemen and Archers spawn at that location. Archers will immediately move to the edge of the balcony and fire on the enemy team while the Officers and Pikemen will remain to protect them. Archers will fire at enemy Pikemen, while also aiming at the Commander during the final phase.

Archers are extremely effective at clearing out Pikemen. While taking the Archer Points as an Attacker do not bring you closer to your goal, it certainly makes it easier as they can help clear defending Pikemen from harming the ram. Once taken, the Defenders are unable to retake Archer Points.

There are three Points in the first phase, four in the second, and one in the final phase. The Points have to be captured in order, although numbers are skipped when moving onto the next phase.

Capturing the Archer Point have 5 states:

Capturing an Archer Point takes about 30 seconds, reduced to 15 seconds when Enhanced capturing.

In all phases, there is a Ballista present on the battlefield. These are usually located on the opposite sidelane to the ones where the Archer Points are, and are placed in locations where there is a view of the phase's objective at all time. These Ballista will deal over half the health of a Hero, two-shotting them. They can also damage the Ram if controlled by a Defending Hero.

Their presence is critical in the third phase, as they can be used to dwindle the Commander's health if the Defending team proves to be too strong to deal with from up front.

The Shield Banner will spawn in set locations on the map during the first and second phase. Just like in the Tribute game mode, the Shield Banner can be seized by either side, slowing and revealing whoever carries it. If the carrier is hit, they will drop the Banner, allowing for either team to take it again. The Shield Banner is critical for either team: Defenders can elongate the ramming process while Attackers can make their Ram more sturdy.

Shield Banners can be placed in an Altar for each side: on the back of the ram for Attackers, and above the gate for the Defenders. Placing a Banner into the Altar will grant a shield to the respective side's defensible object (750 health for the Attacker's Ram, 1 extra hit for the Defender's Gate). Unlike the Tribute game mode though, once Shield Banners are placed in an Altar, they are consumed and cannot be removed. However, they will respawn regularly after they first spawn, giving another chance for either side to seize the banner.

Banners spawn three minutes after the start of the phase, and after four minutes when the Banner is consumed. The Banner can only be stacked up to two times for either defensible objective.

All three phases of the map will have a healing zone where Heroes can go and regain health. Healing zones start out as neutral, but can be captured or recaptured by either team. Whichever team holds the healing zone can regain health by standing in it.

Capturing a Healing zone is quick, taking only 3 seconds (less with more allies). Standing in the zone heals for 10 health per second.

Boost are located at set locations on the map in all three phases. There are three kinds of boosts: the Vindicator boost that increases a Hero's damage against enemies; the Guardian boost which grants a shield equal to half of the Hero's max health, and the Scout boost which increase movement speed drastically.

Boosts spawn 45 seconds into each phase and respawn after 3 minutes when consumed. Among the three boosts, the Scout boost will not appear in any of the Breach map's third phase.

Each map will have a special area located in a side area of the second phase, containing the Guardian who protects a special altar. This altar is a buff spawn, and provides a great boost to whichever team receives it.

Either team can attempt to kill the Guardian. When this happens, all Heroes within the room and on the same side as the slayer (the Hero who dealt the last blow) will receive the buff, which grants the Guardian Buff which helps the slayer's team clear Pikemen on top of infinite stamina and full shields.

If all Heroes leave the Guardian's vicinity during combat with it, the Guardian will return to guard the altar while regenerating all of its health. The Guardian and the buff also disappears once the Second Phase is over.

The model for the Guardian is determined by the map's designated faction, not the Defending team's faction.

Check out more on its respective page.

The Commander is the final objective of the map. These champions have a large health pool as well as slow but powerful swings. Their heavy attacks are unblockable but rather slow and easy to parry. They also will feature a Highlander style Zone Attack, with each of the three swings being unblockable too. They have the Pugno Mortis and Fire Flask feats equipped, using them when hurt enough.

The Commander's health pool is much larger than The Guardian, although the Commander cannot activate Revenge as the Guardian can. This may be due to the fact that the defending Heroes are charged with protecting him, in comparison to the Guardian which is a neutral entity.

The model for The Commander is determined by the Defending team's faction.

As an asymmetrical game mode, the victory conditions will be different for both the attacking and defending teams. 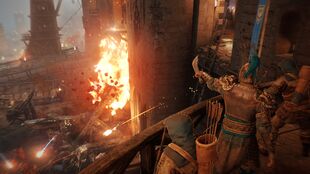 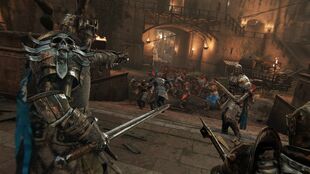 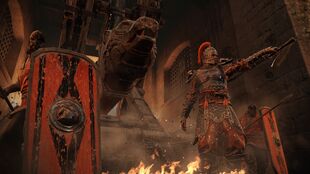 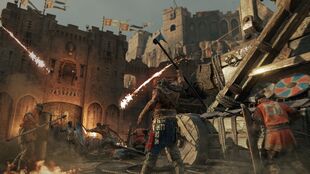 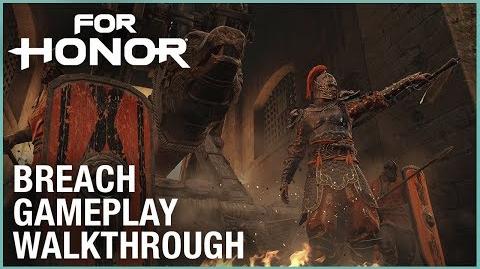 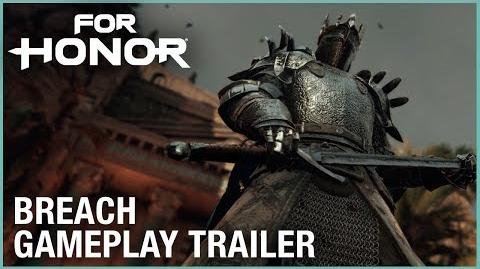 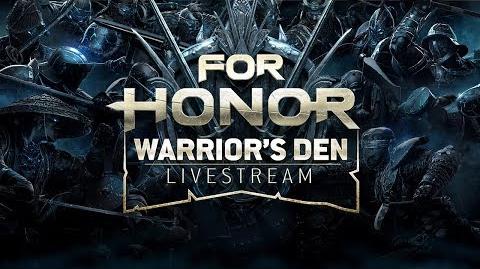 For Honor- Warrior’s Den LIVESTREAM August 30 2018 - Ubisoft
Add a photo to this gallery
Retrieved from "https://forhonor.fandom.com/wiki/Breach?oldid=28424"
Community content is available under CC-BY-SA unless otherwise noted.