The Blackstone Legion was a warring Knights faction led by a female warlord named Apollyon.

All three playable factions interact with the Legion during their Story Campaign. The Warden (the main character the player plays as in the Knight campaign) was introduced (and knighted) into the Blackstone Legion. It is named for the obsidian table around which the legion was first formed.

The female warlord Apollyon took over the legion by killing her rivals and recruiting many experienced soldiers loyal to her. Her eventual goal for the legion was to start a war between the three main factions. Under her command she subjugated the majority of the splintered Knight legions, including the remains of the Iron Legion.

Apollyon's mission was to start an endless war between the Samurai, Vikings and Knights. She began her mission in Valkenheim by invading many Viking fortresses with the help of Holden Cross, the Warden, and Mercy. Using superior tactics and technology, the Blackstones pushed their army all the way to Svengård. This location was the Legion's primary target: A fortress storing the seed grain of the Viking clans. They attacked the fortress and killed its leader, Gudmundr. With the seed grain under control the Legion burned half of the food and left a little bit on the order of Apollyon. This was done so that the Viking clans would fight over what little food there was. Her plan would succeed and lead to the Vikings's Great Raid on the Samurai.

This also led to the Warden abandoning their oath and leaving the Blackstone Legion.

Fall of the Blackstone Legion

In the chaos of the Great Raid the Legion and Apollyon stormed the palace and killed the Emperor, capturing the various Daimyo in the process. Apollyon gave the throne to Seijuro and left the other Daimyo in the Myre. A Kensei and exiled Daimyo named Ayu killed the other Daimyo, recruited Seijuro and took the throne. With knowledge of Apollyon's doings, The Orochi was sent to Ashfeld on orders from Ayu.

Meanwhile, in Ashfeld, the Warden and Cross along with a complement of other warriors left the Blackstones and reformed the Iron Legion. These soldiers would later side with the Samurai of the Dawn Empire during the siege of the Blackstone fortress.

The Samurai and Iron Legion stormed the Blackstone Fortress, surrounding the keep and blocking all access tunnels. The Legion fought to the last man, Apollyon herself was defeated in single combat against the Orochi. Toward the end of the siege the Warborn showed up and the uneasy alliance broke, the three factions fighting each other once more.

The Blackstone Legion stirred up activity from all three of the factions but destroyed any hope of peace in Ashfeld. The Vikings had been brought back to their former selves, raiding and pillaging and serving as a general threat. The Iron Legion had been reformed and united, now under the Lord Warden. And finally, the Samurai are now ruled by a powerful Empress. Apollyon had succeeded in her goal of weeding out the weak and forcing a conflict between the three factions. This war would go on for many years to come.

Some time after Apollyon's death, Holden Cross, Stigandr and Ayu meet and share their stories at the request of the Lord Warden. They agree to try for peace, even though it will likely result in their deaths.

The more extreme members of the Blackstone Legion, one of them being Astrea, were exiled to the East, where there was a civil war among the Wu Lin. Astrea would rally up the ex-Blackstone members and form new allies with certain Wu Lin warriors to make a return to Heathmoor as the newly formed Order of Horkos.

The Blackstone Legion was very strong at its height. It consisted of many smaller legions that swore fealty to Apollyon, including the Regal Legion (who owned the fortress Daubeny inhabited) and the larger Iron Legion. Its ranks were filled with the enemy's finest warriors, who were captured and conscripted into the Blackstones if they were deemed worthy. It is implied that they also house many former Wardens, such as Ademar and Apollyon herself. 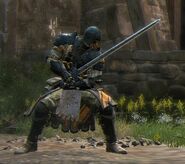 Apollyon, leader of the Blackstone Legion