View source
watch 01:06
For Honor Trailer: The Berserker (Viking Gameplay) - Hero Series #5
Do you like this video?
Play Sound

"The vast forests of our lands are said to be filled with the spirits of beasts. Sometimes those beasts join us on the battlefield: Berserkers. Wild, free, and utterly without fear, they fight with twin axes but their true weapon is their passion. There is an ancient riddle: what is stronger than steel? Blood is our answer; blood and fury."

Berserkers are a playable hero class in For Honor.

Chaotic and brutal dual-axe-wielding Vikings. That is the simplest way one can describe the Berserkers. Their savage love of combat strikes fear into the hearts of most, friend and foe alike. The Berserker fights relentlessly, capable of vanquishing foes before they can mount a decent defense. Unconcerned with their personal safety in putting up a proper defense, these vicious warriors focus instead on killing as many enemies as they can.[1]

Historically, Berserkers have been described as warriors who would charge into battle without armor, instead wearing the pelts of whatever animals they believe themselves to be possessed by. Like their historical counterparts, the Berserkers wear little armor, only light leather shoulder pads and animals pelts with a mask over their eyes.

Viking Hand Axe - The Viking have turned a common tool into a vicious, highly effective weapon. The hand axe combines speed of handling with the balance required for accurate throwing over short ranges. Their lethality is legendary when placed in the hands of the blood-crazed Berserkers, especially when they come as a set.

Berserkers are intimidating Viking engines of death. They combine close-combat harassing abilities and have infinite chain attacks that make their offense intimidating to face against. Their uninterruptible stance allows them to be relentless even in the face of multiple enemies.

Available Perks for the Berserker can be viewed on the Perks page.

A Berserker alongside a Raider, a Warlord, and a Valkyrie. 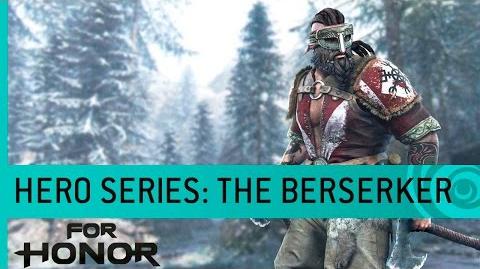 For Honor Trailer The Berserker (Viking Gameplay) - Hero Series 5 US