Start a Wiki
watch 02:19
For Honor Trailer: The Warlord Apollyon – Story Campaign Gameplay
Do you like this video?

Apollyon is the main antagonist in the Story Campaign mode of For Honor. She serves as the final boss of the Samurai Story and, by extension, the entire Campaign.

The undisputed Warlord of the Blackstone Legion, through her the Blackstones have come to rule Ashfeld. She admires the warriors of all three factions but is disgusted that they have begun setting aside their warring ways in favor of peace. She intends to start a new age of war by turning the three factions and their leaders against each other. She wishes to usher in, as she calls it, "an age of wolves," viewing the groups that are willing to go to war as wolves who will fight for survival and the ones who favor peace as sheep waiting to be slaughtered.

Apollyon stands tall in ash black armor, reflecting her determination to bring continuous war upon the world. Her armor is not any normal armor of a Warden, but one that was refitted from that of a Lawbringer's, evident with parts of the armor retaining the Lawbringer's armor aesthetics such as the neck guard on the chest plate. Spikes and sharp edges are present on her armor, and her helmet looks like no other with the stare of death embedded in its design

Before For Honor's Story CampaignEdit

The young Apollyon grew up in the wilds. One year, a great Viking horde from Valkenheim descended on her village. There were not enough Iron Legionaries to defend everywhere at once, so it was that a Lawbringer named Dante visited the village of the young warlord-to-be. He judged her people unworthy of defending and rode away to safer lands. When the Vikings came, few of her people survived.

It proved to be just one of many horrors she would witness. And each one demonstrated to her clearly what the world demands of those who would live in it. There are predators, and there are prey. Humans are unique in that they can decide which one they are.

She spent her youth training to fight: as a criminal, as a soldier, and later as a Warden.

When she was sixteen, she hired a mercenary to find the Lawbringer who had doomed her people, specifically ordering him to be spared, stating "he is my prey. You are merely my eyes." When she found where Dante had been hiding, she ambushed him, dragged him into the street to then brutally execute him. Afterwards, she brought his armor to a blacksmith and had it re-fashioned to fit her. Even in the present, she wears it still. It is a warning against anyone who would dare to use the law against the strong.

When the Knights of Ashfeld grew tired of the Iron Legion's disinterested rule, Apollyon was among the fifteen founding Warmasters of the violent and ambitious Blackstone Legion. Eight of those Warmasters tried to become the Blackstone Warlord. All except for Apollyon died in the attempt. Now, she and the other seven have taken demon names, as a reminder of what you must become to change the world.

She no longer speaks of her real name. Few still living have heard it.

During For Honor's Story CampaignEdit

Apollyon is seen first at a site of ruins where deserters from the Iron Legion are camping out. When The Warden and Stone are about to be overwhelmed and killed, Apollyon attacks the deserters and kills many of them, and has her soldiers subdue the rest. She then has the survivors released from their bindings, prompting two of them to try to kill her. After defeating them she proceeds to kill the rest of the survivors before welcoming the two who tried to kill her into the Blackstone Legion.

Later she is seen overseeing the siege of Gränsgård, and is at the forefront when the Blackstone Legion storms the fortress. After the battle, as Cross is executing the prisoners, Apollyon stops him from executing Ragnar. Impressed by the Viking's resistance to being executed (Mercy had to strike him on the back of his knees to get him to kneel) and the fact that he had killed forty Blackstone soldiers, Apollyon lets Ragnar go.

Apollyon assigns Mercy to infiltrate and tear down a fort in Dalborg to form a path for the Blackstone Legion in order to reach Svengård, as she, Holden Cross, The Warden and her men wait beside a campfire. During the Siege of Svengård, she is seen in the start of the mission talking with The Warden about her intentions for the Vikings. Later on, she helps The Warden up after The Warden falls off the battering ram when the gate had been breached. At the end of the mission, she lays out her full goal for the Vikings: to put them at each other’s throats in order to teach them who they truly are.

Apollyon reappears at the end of the Viking campaign, riding off with her horse alongside her knight after she had been observing the Vikings from a distance. It is then revealed that 5 years prior, Apollyon discussed with a group of her knights, including Cross, that she intends to create war through the manipulation of the Vikings.

Apollyon leads the invasion of the Imperial Palace at the beginning of the Samurai campaign, where she slaughters The Emperor and captures multiple daimyo. She offers The Emperor’s throne to all the daimyo, and executes those who refuse to take it. She leaves the remainder in the swamp of The Myre to fight to the death, including Ayu, Kizan, Dokuja and Ranja, to create a civil war among the Dawn Empire. However, Seijuro is an exception as he responds to the offer with hostility, saying that after he kills the daimyo he will slay Apollyon. Impressed with his aggression, Apollyon immediately gives Seijuro the palace. Apollyon is then seen dropping off Ayu in the middle of the swamp, riding alongside her Lawbringer on horseback.

When The Orochi and his/her friends successfully unite their people against the common enemy, Apollyon is seen fighting off multiple invaders of her fortress consisting of Samurai from the Dawn Empire and Knights of The Iron Legion. She then assigns her knights to dispatch the Dawn Empire while she deals with The Iron Legion. As The Orochi reaches Apollyon, they duel for a while, gradually ascending higher and higher within the fortress until they are at the peak of a balcony. The Orochi defeats Apollyon, but Apollyon simply gloats about her success of turning every faction of warriors on each other, right as the Warborn break into the walls of the castle, generating a conflict between the Vikings, the Knights and the Samurai once more. Last of all, Apollyon says that the only thing she wants is for everyone to realize who they are: wolves. Succumbing to her wounds, she collapses to the floor, lifeless.

Apollyon may have been a ruthless warlord, but she was a philosopher of sorts. She views the social order that makes up society as a fragile illusion, seeing as rule by the strong to be the true order of the world. This philosophy was likely born from her repeatedly being displaced by war and violence. In every case, society crumbled and only the strong survived. As such, she values strength above all else. It is not even the strength of the individual that she seeks but the strength of their spirit, respecting even defeated warriors if they show the resolve to continue fighting. Many of the Knights in her Blackstone Legion were recruited not from prisoners who swore fidelity but from opponents who insisted to continue fighting even in defeat.

Her laws of selection not only applied to her knights but also to her opponents, sparing those she deemed worthy. She did not hold herself above her own beliefs either. In her final confrontation with The Orochi, she would compliment her opponent. And when finally slain, she only wished to let her final words be known. Her desire to trigger war does not come from a love of war and violence, but the disgust of the stagnation that was resulting from the peace.

Her admiration of strength can be seen in her views of other individuals around her. Daubeny left the Blackstone Legion and Apollyon looks upon him with disgust as she sees him as little more than a petty thief and deserter. However, Holden Cross would eventually come to not just desert but turn on her, but she does not hold the same animosity as she still considers him strong.

Apollyon is also very knowledgeable, familiar with the religions, language, and customs of all three factions. While others hold the other two factions with varying degrees of disgust, Apollyon looks upon them with respect.

The final confrontation with Apollyon comes in three phases.

Like other duels, you trigger the fight when you lock onto Apollyon. However, unlike other duels, you should prepare yourself before you even trigger the cutscene. A Peacekeeper and a Warden are fighting in the backroom and will join their master when they are done with their opponents. If you dawdle, you will start the fight with three opponents. If you immediately begin the fight, you will have a few moments to take on Apollyon one-on-one before her subordinates join her. When this happens, it is recommended you focus on her subordinates and dispatch them first before refocusing on Apollyon.

In the first phase, Apollyon's moveset is limited to heavy attack combos as well as a top crushing counterstrike. Be wary about performing an opening attack with a top guard. The use of heavy attacks also makes her easy to parry at this stage.

During the second phase, you both face-off on a flight of stairs. An Orochi's maneuverability is its greatest asset and now it has been limited by the narrowness of the stairs. Apollyon now has access to the Warden's full moveset as well as an unblockable swing. She will frequently perform the two side light attacks followed by a shoulder bash followed by another two side lights. On higher difficulties, she will sometimes feint the shoulder bash into a guardbreak. At this point, she also begins parrying as well.

The final phase, Apollyon can now perform an unblockable impaling charge, one that can take away a significant amount of damage if it lands. If her body begins to glow, either retreat, interrupt or prepare to dodge. The challenging part of this phase is that debris from her castle will begin falling onto the terrace you fight on. A red circle will indicate where debris will land so do not hesitate to run. She will keep fighting until she is low. Use your lights and make sure to parry to get her low fast.

A good technique to use is utilising the poisonous mushroom traps one can acquire before the fight. It is recommended to not waste them when helping Okuma and instead defeat the enemies without them. These traps can be extremely helpful to land heavy attacks during the final phase, especially on harder difficulties. It is most recommended to use them during the second and third phase of the fight against her due to the small fighting space of the second phase and the lack of cutscenes that will interrupt one's attack during the final phase.

Apollyon on her horse. 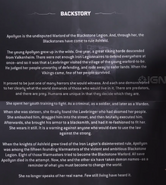 Apollyon's Statue
Add a photo to this gallery
Retrieved from "https://forhonor.fandom.com/wiki/Apollyon?oldid=31271"
Community content is available under CC-BY-SA unless otherwise noted.